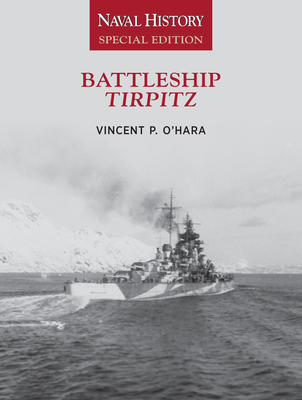 Building upon the expertise of the authors and historians of the Naval Institute Press, the Naval History Special Editions are designed to offer studies of the key vessels, battles, and events of armed conflict. Using an image-heavy, magazine-style format, these Special Editions should appeal to scholars, enthusiasts, and general readers alike. In 1939 the battleship was the queen of the seas. Battleships were designed to project power. They were the biggest and most powerful ships afloat, and the yardsticks by which the world judged naval strength. Within this context, the German battleship Tirpitz (sister ship of Bismarck) was one of the most effective instruments of naval power ever deployed. The British called her The Beast. She spent the greater part of the Second World War tucked away in isolated fjords north of the Arctic Circle--where she became known as, The Lonely Queen of the North. She sortied only three times and never fired her guns at an enemy warship. Yet, against this menace the British exerted unequaled effort. At all times they kept a pair of modern battleships standing by to face her should she sail; they built mini-submarines that could operate in the waters of the fjords; they repeatedly massed aircraft carrier strike forces in futile efforts to knock her from the war. At last, they invented massive ordnance--the Tallboy bomb, the largest non-nuclear explosive device of the war. Sending their heaviest bombers against her, and after three years of sustained effort, the Beast was sunk. The remarkable career of this remarkable ship is the subject of this authoritative and heavily illustrated Special Edition. It considers Tirpitz's design, her construction, her historical context and all of her operations. The power of this individual ship and the influence she exerted on the entire course of the war makes for an enlightening demonstration of the sometimes very unexpected way sea power can be expressed.

Vincent P. O'Hara is the author of several works of naval history, most recently, Six Victories: North Africa, Malta, and the Mediterranean Convoy War November 1941-March 1942. He was the Naval Institute Press Author of the Year for 2015 and holds a history degree from the University of California, Berkeley.