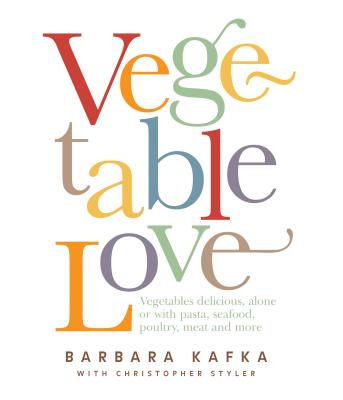 Barbara Kafka has been shaping the way America cooks for three decades. She’s doing it again.

With her customary originality, thoroughness, and passion for great cooking, Barbara Kafka has created the cook’s ultimate vegetable resource: 750 original recipes showcasing everything she adores about the vegetable world, from the lowly green bean to the exotic chrysanthemum leaf—even stretching the definition to include potatoes, mushrooms, and avocados just because she’s crazy mad for them.

Her love of vegetables shows in every dish, each impeccably researched, consistently foolproof, and put to the Kafka taste test. Among these delectable dishes are dozens of essays, including personal reflections on the garden and migrations in the vegetable world, for example; all are erudite and unfailingly entertaining.

Kafka’s book within a book—an at-a-glance, we’ve-done-all-the-work-for-you Cook’s Guide—provides practical, encyclopedic information on how to buy, measure, substitute, and prepare every food that ever called itself a vegetable.

Few have done more to define how Americans prepare food than Barbara Kafka, whose IACP and James Beard award-winning books Roasting and Microwave Gourmet made two underutilized techniques central to everyday cooking. Ms. Kafka is a former food editor of Vogue and a frequent contributor to The New York Times. She lives in New York and Vermont. The author of Artisan's Soup: A Way of Life and Vegetable Love, Barbara Kafka's immense achievements were recognized once more in 2007, when the James Beard Foundation gave her its Lifetime Achievement Award. Her most recent book is The Intolerant Gourmet: Glorious Food Without Gluten & Lactose.

Christopher Styler has enormous culinary range. He is a chef, cookbook writer, editor, restaurant consultant, and culinary producer of some of PBS-TV’s most successful cooking series. He lives in New Jersey.