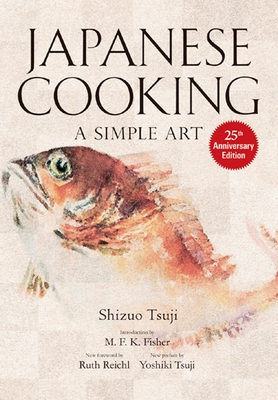 When it was first published, Japanese Cooking: A Simple Art changed the way the culinary world viewed Japanese cooking, moving it from obscure ethnic food to haute cuisine.


Twenty-five years later, much has changed. Japanese food is a favorite of diners around the world. Not only is sushi as much a part of the Western culinary scene as burgers, bagels and burritos, but some Japanese chefs have become household names. Japanese flavors, ingredients and textures have been fused into dishes from a wide variety of other cuisines. What hasn’t changed over the years, however, are the foundations of Japanese cooking. When he originally wrote Japanese Cooking: A Simple Art, Shizuo Tsuji, a scholar who trained under famous European chefs, was so careful and precise in his descriptions of the cuisine and its vital philosophies, and so thoughtful in his choice of dishes and recipes, that his words—and the dishes they help produce—are as fresh today as when they were first written.

SHIZUO TSUJI (1935-1993) was the former head of the prestigious Tsuji Culinary Institute in Osaka, the largest school training professional chefs in Japan. The author of over 30 books on gastronomy, travel and music, he was a leading figure in the international culinary community. Japanese Cooking: A Simple Art was instrumental in popularizing Japanese cuisine in the West. Tsuji was also the author of Kodansha’s bestselling Practical Japanese Cooking.

". . .quite the most illuminating text around on Japanese food. . ."—Nigella Lawson


". . .this is much more than a cookbook. It is a philosophical treatise about the simple art of Japanese cooking. Appreciate the lessons of this book, and you will understand that while sushi and sashimi were becoming part of American culture, we were absorbing much larger lessons from the Japanese. We were learning to think about food in an entirely new way." —from the new Foreword by Ruth Reichl


"If Kurosawa had ignited my love for the country, Mr. Tsuji deepened and defined it." —Jonathan Hayes in The New York Times


"A complete guide to Japanese cooking, this collection is a must-have for anyone interested in Japanese food or culture." —Publishers Weekly


"My go-to for reference and classic recipes." —Debra Samuels, The Boston Globe


"A core addition to any and all personal, professional, or community library multicultural cookbook collections." —Midwest Book Review


"Still the foremost source book of cooking concepts and recipes from Japan." —GlobalGourmet.com