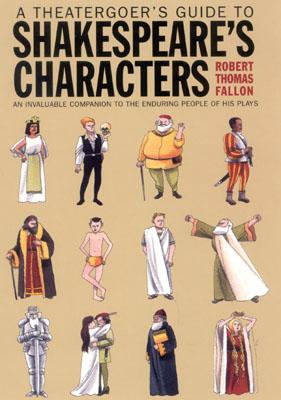 By Robert Thomas Fallon
$27.50
Email or call for price.

Following on his successful Guides to the plots and themes of Shakespeare's plays, Robert Fallon now explores the world of characters created by the Bard. Like Mr. Fallon's earlier books, A Theatergoer's Guide to Shakespeare's Characters is designed to enhance the playgoer's enjoyment of a performance, but it also makes for enlightening reading after the show. Intended for the general reader, it is written in plain but not inelegant English and avoids the specialized language of the theater and the academy. More than eight hundred characters appear in Shakespeare's thirty-eight plays--an astonishing variety of kings and queens, mothers and fathers, clowns and fairies, peasants and dukes, villains and heroes, the young and the old, the sinning and the sinned against. How could he have known so many in his diverse culture and portrayed them so convincingly? Mr. Fallon has chosen some sixty of these figures to examine. With few exceptions, they are the ones that modern theatergoers are most likely to encounter in performance, those that have captured the imagination of audiences over the centuries: Lear, Hamlet, Cleopatra, Rosalind, Portia, and the like. But some lesser-known characters are offered for their inherent interest and their example of Shakespeare's "infinite variety." Mr. Fallon locates each of them in the story of their play, relates them to other characters, shows how they change (or don't), and sums up their character and nature. Readers of his other Guides know they will find in Characters an entertaining and useful appraisal. "This book is as handy as they come...distilled without being dunderheaded--reader-friendly in the extreme."--American Theatre (on A Theatergoer's Guide to Shakespeare)