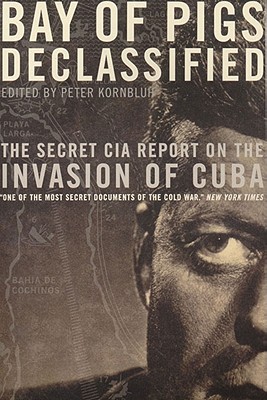 For decades, the CIA's top secret postmortem on the April 1961 Bay of Pigs invasion has been the holy grail of historians, students, and survivors of the failed invasion of Cuba. But the scathing internal report on the worst foreign policy debacle of the Kennedy administration, written by the CIA's then-inspector general Lyman Kirkpatrick, has remained tightly guarded--until now.

Dislodged from the government through the Freedom of Information Act, here is an uncompromising look at high officials' arrogance, ignorance, and incompetence, as displayed in their attitude toward Castro's revolution and toward the Cuban exiles the CIA had organized to invade the island. Including the complete report and a wealth of supplementary materials, Bay of Pigs Declassified provides a fascinating picture of the operation and of the secret world of the espionage establishment, with stories of plots, counterplots, and intra-agency power struggles worthy of a Le Carr novel.

Includes: the complete text of the CIA report; a critical introduction; the newly declassified response to the report from Richard Bissell, who masterminded the operation; the first joint interview with the managers of the invasion, Jacob Esterline and Colonel Jack Hawkins; a comprehensive chronology; and biographies of the key participants.

Peter Kornbluh directs the Chile Documentation Project at the National Security Archive. He is the author of "Bay of Pigs Declassified: The Secret CIA Report on the Invasion of Cuba" and "The Pinochet File: A Declassified Dossier on Atrocity and Accountability" and a co-author (with Laurence Chang) of "Cuban Missile Crisis, 1962: A National Security Archive Documents Reader" and (with Malcolm Byrne) of "The Iran-Contra Scandal: The Declassified History," all published by The New Press. He lives in Washington, D.C.