The Brinkley Girls: The Best of Nell Brinkley's Cartoons from 1913-1940 (Hardcover) 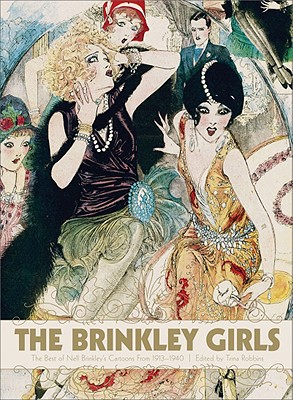 For over thirty years Nell Brinkley’s beautiful girls pirouetted, waltzed, Charlestoned, vamped and shimmied their way through the pages of William Randolph Hearst’s newspapers, captivating the American public with their innocent sexuality. This sumptuously designed oversized hardcover collects Brinkley’s breathtakingly spectacular, exquisitely colored full page art from 1913 to 1940. Here are her earliest silent movie serial-inspired adventure series, “Golden Eyes and Her Hero, Bill;” her almost too romantic series, “Betty and Billy and Their Love Through the Ages;” her snappy flapper comics from the 1920s; her 1937 pulp magazine-inspired “Heroines of Today.” Included are photos of Nell, reproductions of her hitherto unpublished paintings, and an informative introduction by the book’s editor, Trina Robbins.

In 1907, at the tender age of 22, Nell Brinkley came to New York to draw for the Hearst syndicate. Within a year, she had become a household name. Flo Ziegfeld dressed his dancers as “Brinkley Girls,” in the Ziegfeld Follies. Three popular songs were written about her. Women, aspiring to the masses of curly hair with which Nell adorned her fetching and idealized creations, could buy Nell Brinkley Hair Curlers for ten cents a card. Young girls cut out and saved her drawings, copied them, colored them, and pasted them in scrapbooks. The Brinkley Girls took over from the Gibson Girls.


Nell Brinkley widened her scope to include pen and ink depictions of working women. Brinkley used her fame to campaign for better working conditions and higher pay for women who had joined in the war effort, and who were suffering economic and social dislocation due to acting on their patriotism. Unlike most of her contemporaries, she drew women of different races and cultures. Except among a small group of avid collectors, she has been unjustly forgotten...until now.

Retired underground cartoonist and current comics historian Trina Robbins has been writing graphic novels, comics, and books for almost half a century. Her subjects have ranged from Wonder Woman and The Powerpuff Girls to her own teenage superheroine, GoGirl!, and from women cartoonists and superheroines to women who kill. She's won an Inkpot Award and was inducted in the Will Eisner Hall of Fame at the San Diego Comic-Con. She lives in a moldering, 100+-year-old house in San Francisco with her cats, shoes, and dust bunnies.

This gorgeously produced, oversized, full-color selection primarily of her newspaper-serial work confirms that her work became more narrative as she progressed from single-subject conceptions to movie-poster-like collages to sequences sectioned by comics-like borderlines…she remained a lavish fashion illustrator at heart.
— Ray Olson - Booklist

To say they don’t make them like this anymore is a gross understatement...a very welcome introduction to an artist whose skills need to be seen to be believed, and an even more welcome reminder that newspapers used to offer readers a lot more than just news and commentary—they also used to offer honest-to-God fine art.
— J. Caleb Mozzocco - Las Vegas Weekly

In a new collection of work by Nell Brinkley from Fantagraphics, beautiful girls travel the world in fabulous dresses, rescue and then marry their men, and generally have a lot of gorgeous fun…the Brinkley Girls came directly on the heels of the Gibson Girls…when the Brinkley Girls supplanted them, they did so with energy and action…fascinating work.
— Sasha Watson - Publishers Weekly

Brinkley is a supremely talented artist with enough eccentricities to make her stand out from the crowd (the weaves of hair she piles on top of her heroines could rival the folds in Spawn’s cape).
— Chris Mautner - Robot 6

While many have long been aware of the general attractiveness of Brinkley’s work, Robbins’ book forces us to look at her art in a way—and at a size—where some of the specifics of Brinkley’s appeal and the basis for her popularity become apparent…[Robbins] paints an overall picture of a fiercely independent cartoonist who learned over the years to work within a system to great reward without ever becoming dominated by it.
— Tom Spurgeon - The Comics Reporter

The handsome hardcover collection The Brinkley Girls brings together a generous sampling of Brinkley’s work, leaning heavy on her stories of industrious women and the he-men they love... Brinkley’s art is so drop-dead gorgeous that readers may long to razor out every page to hang on the wall. [Grade] A-.

Comics herstorian Robbins (The Great Women Superheroes) has produced a wonderful tribute to Brinkley, reprinting in full three serials and numerous shorter works with ample biographical background. With their swoon-worthy hair and wardrobes, the Brinkley Girls could kick off a whole new cosplay aesthetic.