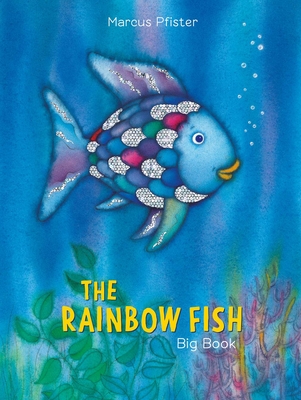 By Marcus Pfister
Email or call for price

The rainbow fish with its iridescent scales is the most beautiful fish in the whole ocean. But since he is also vain and proud, he becomes more and more lonely over time. Then he realizes that you can’t win friends through beauty. He overcomes his pride and begins to distribute his glitter scales to the other fish.

Eye-catching foil stamping, glittering on every page, offers instant child appeal, but it is the universal message at the heart of this simple story about a beautiful fish who learns to make friends by sharing his most prized possessions that gives the book its lasting value.

Rainbow Fish has been a favorite of children all over the world for 30 years. Its indelible message is simple—a pleasure shared is the nicest pleasure. Now children can enjoy this story time favorite in this oversized format—similar to the one used by former first lady, Michelle Obama, when she read The Rainbow Fish to children at the White House Easter Egg Roll in 2016.

Marcus Pfister was born in Bern, Switzerland. After studying at the Art School of Bern, he apprenticed as a graphic designer and worked in an advertising agency before becoming self-employed in 1984. His debut picture book, The Sleepy Owl, was published by NorthSouth in 1986, but his big breakthrough came six years later with The Rainbow Fish. Today, Marcus has illustrated over fifty books that have been translated into more than fifty languages and received countless international awards. He lives with his wife, Debora, and his children in Bern.