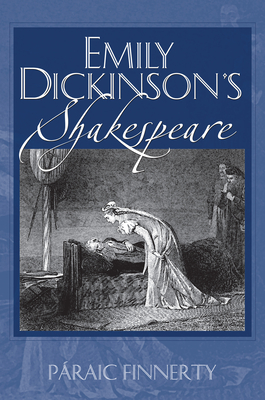 By Paraic Finnerty
$32.95
Email or call for price.

One of the messages that Emily Dickinson wanted to communicate to the world was her great love of William Shakespeare—her letters abound with references to him and his works. This book explores the many implications of her admiration for the Bard.

Páraic Finnerty clarifies the essential role that Shakespeare had in Dickinson's life by locating her allusions to his writings within a nineteenth-century American context and by treating reading as a practice that is shaped, to a large extent, by culture. In the process, he throws new light on Shakespeare's multifaceted presence in Dickinson's world: in education, theater, newspapers, public lectures, reading clubs, and literary periodicals.

Through analysis of letters, journals, diaries, records, periodicals, newspapers, and marginalia, Finnerty juxtaposes Dickinson's engagement with Shakespeare with the responses of her contemporaries. Her Shakespeare emerges as an immoral dramatist and highly moral poet; a highbrow symbol of class and cultivation and a lowbrow popular entertainer; an impetus behind the emerging American theater criticism and an English author threatening American creativity; a writer culturally approved for women and yet one whose authority women often appropriated to critique their culture. Such a context allows the explication of Dickinson's specific references to Shakespeare and further conjecture about how she most likely read him.

Finnerty also examines those of Dickinson's responses to Shakespeare that deviated from what might have been expected and approved of by her culture. Imaginatively departing from the commonplace, Dickinson chose to admire three of Shakespeare's most powerful and transgressive female characters—Cleopatra, Queen Margaret, and Lady Macbeth—instead of his more worthy and virtuous heroines. More startling, although the poet found resonance for her own life in Hamlet, Romeo and Juliet, and Macbeth, she chose, in the racially charged atmosphere of nineteenth-century America, to identify with Shakespeare's most controversial character, Othello, thereby defying expectations once again.

"Emily Dickinson's Shakespeare is much more than a source study, though it is that in passing. It amounts to a cultural biography of Dickinson—a biography of her shifting yet enduring imagination. It includes a good deal of American cultural history as well. . . . This is a very fine book, written with scholarly skills that seem to belong to an earlier era and with a cultural, psychological, and historical savvy that very much belongs to the present moment. Emily Dickinson's Shakespeare is beautifully researched, absorbing in its critical narrative, and a joy to read."—Emily Dickinson Journal

"Pariac Finnerty amply demonstrates that Emily Dickinson, along with her entire cultural milieu, was fully saturated with Shakespeare. . . . Finnerty has an uncommonly evenhanded way of showing how Dickinson both participated in standard conventional practices and responded brilliantly and idiosyncratically to Shakespeare's."—New England Quarterly

". . . a well-researched, carefully organized, and altogether engrossing book. Finnerty examines "Dickinson's Shakespeare" from a wide variety of perspectives - cultural, psychological, literary. It would be difficult to imagine a more completely realized study of the American poet and the English bard."—Emily Dickinson International Society Bulletin