Cats and Conservationists: The Debate Over Who Owns the Outdoors (New Directions in the Human-Animal Bond) (Paperback) 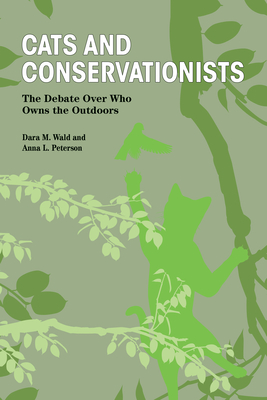 Cats and Conservationists is the first multidisciplinary analysis of the heated debate about free-roaming cats. The debate pits conservationists against cat lovers, who disagree both on the ecological damage caused by the cats and the best way to manage them. An impassioned and spirited conflict, it also sheds light on larger questions about how we interpret science, incorporate diverse perspectives, and balance competing values in order to encourage constructive dialogue on contentious social and environmental issues.

On one side of the cat debate stand many environmentalists, especially birders and conservation organizations, who believe that outdoor cats seriously threaten native wildlife. On the other side are many animal welfare advocates, who believe that outdoor cats generally do not pose a major ecological threat and that it is possible for cats and wildlife to coexist. They believe that it is possible, mainly through trap-neuter-return projects (TNR), to keep free-roaming cat populations in check without killing large numbers of cats.

Careful analysis suggests that there remain important questions about the science on both cat predation and TNR effectiveness. Yet both sides of the conflict insist that the evidence is clear-cut. This false certainty contributes to conflict between conservationists and cat lovers, and obscures common goals that could generate constructive discussions and collaborative efforts among scientists, policymakers, conservationists, and animal welfare advocates. Cats and Conservationists aims to facilitate such collaboration in order to manage outdoor cats and minimize the damage they cause. It also offers models for constructive debates about the public role of science in other polarized public conflicts over science and environmental topics.

Dara M. Wald is an assistant professor of environmental communication in the Greenlee School of Journalism and Communication at Iowa State University. Her research explores the drivers of environmental conflict, the barriers to effective environmental communication, and the potential pathways for collaboration over water, wildlife, and land. Her work has been published in scholarly journals, including Frontiers in Ecology and Conservation, Conservation Biology, and the Journal of Environmental Management. She is an associate editor for the Science and Environmental Communication specialty section within Frontiers in Communication. She has received grants from the Morris Animal Foundation and the National Science Foundation. Anna L. Peterson is a professor of religion at the University of Florida. She writes and teaches about social and environmental ethics, religion and politics, and animal studies. Her recent books include Being Animal: Beasts and Boundaries in Nature Ethics and Everyday Ethics and Social Change: The Education of Desire. She is also a coauthor of Working Toward Sustainability: Ethical Decision-Making in a Technological World.