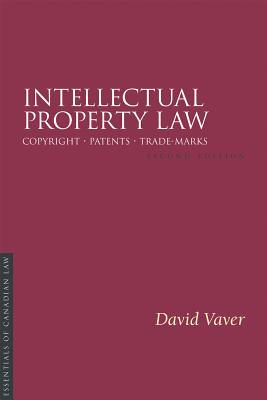 By David Vaver
Email or call for price.
Usually Arrives in 2-10 Days

Since the publication of the first edition in 1997, David Vaver's Intellectual Property Law: Copyright, Patents, Trade-Marks has become one of the most important treatises on the subject in Canada. It has been relied upon by scholars, practitioners, policy analysts and students alike, as well as those who use or rely on intellectual property, and has been cited as a leading authority by all levels of courts, including the Supreme Court of Canada. Now, nearly fifteen years later, Professor Vaver has produced a new and greatly-expanded edition that not only takes account of developments that have occurred in domestic and international law, but also provides an in-depth and engaging discussion of the profound changes in the social, economic, and technological environments in which intellectual property law operates.