Running with Swords: The Adventures and Misadventures of an Irrepressible Canadian Fencing Champion (Hardcover) 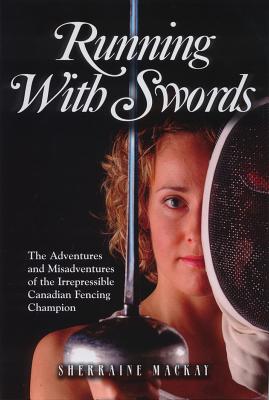 Prior to the 2004 Athens Olympics, few Canadians - outside fencing circles - knew very much about Sherraine MacKay, but as the countdown to those games began, her name became more and more familiar, and while the world of fencing had been, up to that time, an esoteric sport at best, it too was suddenly thrust into the limelight. It helped, of course, that in the last World Cup of the season prior to the Games, MacKay had won gold (her second), that she had been ranked as high as number two, and consistently ranked among the top 10 female fencers in the world over the past five years. It helped that her photo suddenly began appearing in our national magazines and in major daily newspapers across Canada. It helped that she was ebullient, outspoken, quick-witted and funny enough to land a spot reading her Letters from Paris on CBC Radio's The Inside Track with host Robin Brown. In a surprise upset, a Greek fencer bested Sherraine in Athens, though the Canadian women's team, which she anchored, finished fourth - the best finish ever by Canadian women in Olympic fencing.

Running with Swords, is Sherraine McKay's journal, her own story of her incredible journey from tiny Brooks, Alberta where she was born, to Paris, France where she moved to train for Athens while teaching English as a second language to elite athletes. At once inspiring, thoughtful and brimming with MacKay's sense of humour, it is also the story of young athletes from Canada and around the world, of the sacrifices made in the pursuit of dreams, the friendships forged, and the joy of the game whether on the track, in the field, in the water, on the ice, or on the piste.

Sherraine MacKay has won at least six World Cups while medalling at nine others and is a four-time medallist at the Pan American Games. In 2001 Sherraine moved to Paris to prepare for the Athens Olympics. She is now living in Budapest, Hungary with her husband Geordie, studying and training with a new coach, and preparing for Beijing.