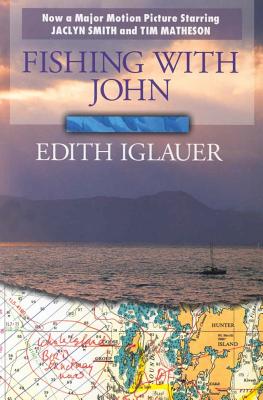 This is a love story; an unlikely convergence of two people from different worlds who were able to make a rich and tender life together, and not only endure each other's company in alarmingly close quarters but revel in it.

Edith Iglauer was born in Cleveland and lived an urban, sophisticated life in New York until she met and married John Daly, a commercial fisherman in British Columbia. She spent more than four years on his forty-one-foot troller, the Morekelp until his sudden death.

John Daly was an impassioned and greatly talented fisherman who was convinced that he could "think like a fish"; an amateur philosopher who worked out, and followed, an orginal set of beliefs and principles; a mystic who, after forty years of fishing, felt himself to be at one with the sea and the mountains along the British Columbia coast; a scholarly looking, high-spirited, full-blown eccentric who covered the white walls of his pilothouse with his favorite quotations in bold black letters ("Lawyers spend their professional careers shoveling smoke. O.W. Holmes")

Fishing with John established Edith Iglauer as one of BC's most popular writers. This unusual West Coast love story sold 16,000 copies in hardcover and continues to be a bestseller in paperback.

Edith Iglauer was born in Cleveland, Ohio. She married Philip Hamburger and raised two sons in New York. A frequent contributor to the New Yorker, she has written a great deal about Canada. Her first book, The New People (1966, reprinted and updated as Inuit Journey in 1979 and 2000) chronicled the growth of native cooperatives in the eastern Arctic. She profiled Pierre Trudeau in 1969 and internationally known architect Arthur Erickson in 1979. Denison's Ice Road is about the building of a 325-mile winter road above the Arctic Circle. Divorced in 1966, she came to Vancouver in 1973. She married John Heywood Daly, a commercial salmon troller and moved to Garden Bay on the BC coast. Daly died in 1978. After writing Seven Stones: A Portrait of Arthur Erickson, Architect (1981) she began recording her memories of her late husband and his salmon troller the MoreKelp. The result was Fishing with John, a runaway bestseller and nominee for the 1989 Governor General's Award for Non-Fiction. Her second memoir, about her career in journalism, was The Strangers Next Door.