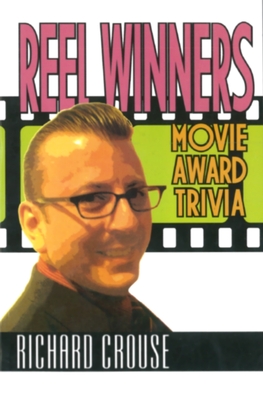 Do you know which televised awards show gives a prize for Favourite Smile?

Or which Oscar host announced that he was going to raffle off a car during the ceremony?

Do you know who won the Golden Raspberry Award for Worst Actress of the 20th Century?

In Reel Winners, Richard Crouse, Reel to Real movie critic and CBC Radio's titan of trivia, gives you the lowdown on movie awards, from eight decades of Hollywood self-congratulation to international awards to the toasts from the fringe (like The Skinnies, which celebrate actors and their skin conditions). Reel Winners is the definitive guide to the inside scoop on movie awards.

Richard Crouse is the co-host of Canada's longest running television show about movies, Reel to Real; the author of five books on pop culture history, including The 100 Best Movies You've Never Seen; the regular film critic for CTV's Canada AM; and a frequent guest on CBC Radio One's Go.

"Richard Crouse is one of Canada's most authoritative voices when it comes to cinema. He is the co-host of the longest running Canadian television show about movies, REEL TO REEL. He is also movie critic on Canada AM.

So what better person to write a trivia book than Crouse? You have questions? He has answers, hundreds of them. The common to the unusual is answered here, and this book will come in handy if you are ever doing a trivia challenge or barroom bet with friends."