Dancing The Dialectic: True Tales of A Transgender Trailblazer (Paperback) 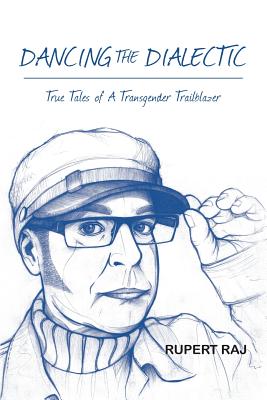 "Trans people today are deeply indebted to pioneers like Rupert Raj, who forged a path where none existed and dared to make the world a better place for all." -Brice D. Smith, PhD, author of Lou Sullivan: Daring To Be A Man Among Men

RUPERT RAJ is a trailblazing, Eurasian-Canadian, trans activist and ex-psychotherapist, who transitioned from female to male in 1971 as a transsexual teenager.

"Dancing the dialectic" between gender dysphoria and gender euphoria, cynical despair and realistic hope, righteous rage and loving kindness, Rupert relates his lifelong fight for the rights of transgender, intersex, and two-spirit people in Canada and the USA since the 1970s. He also portrays his later-life role as an eco-activist and animal liberationist working to free Mother Earth's enslaved farmed animals and expand the circle of compassion, as exemplified by ecofeminism, environmentally-engaged Buddhism, and Native spirituality.

He is (co-)editor of Trans Activism in Canada: A Reader and Of Souls & Roles, Of Sex & Gender: A Treasury of Transsexual, Transgenderist &Transvestic Verse from 1967 to 1991.

Rupert Raj is a trailblazing, Eurasian-Canadian, trans activist and ex-psychotherapist, who transitioned from female to male in 1971 as a gender-distressed, transsexual teenager. As a trans activist, he co-founded five transsexual peer-support groups across Canada from 1978 to 2000. As a therapeutic gender consultant from 2000 to 2015, he counselled transgender, intersex, and two-spirit adults and gender non-conforming youth. Grounded in his TransPositive Therapeutic ModelTM, Raj has trained health care and social service providers, taught educators and students, consulted with employers, lawyers and politicians, and testified at human rights hearings. He has published trans-focused, clinical research papers in scholarly journals and (co-)edited Trans Activism in Canada: A Reader (2014) and Of Souls & Roles, Of Sex & Gender: A Treasury of Transsexual, Transgenderist & Transvestic Verse from 1967 to 1991 (2017). In recognition of his nearly fifty years of service to the trans/queer community, Rupert was inducted into the Canadian Lesbian & Gay Archives in 2013, and was presented with the Canadian Centre for Gender & Sexual Diversity's "Youth Role-Model-of-the-Year Award" at his 65th birthday/retirement party in 2017. Raj is now morphing from Gender Worker to Rainbow Warrior, working as an eco-activist/animal liberationist to free Mother Earth's enslaved farmed animals and expand the circle of compassion.