The CRISPR Generation: The Story of the World's First Gene-Edited Babies (Paperback) 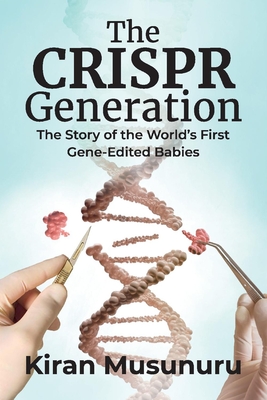 A leading physician, scientist, and expert in gene editing explains how a series of scientific breakthroughs led to the medical scandal of the decade.
In November 2018, Dr. He Jiankui of Shenzhen, China, announced via YouTube that he had created the world's first gene-edited babies. It soon became clear that this was not a historic scientific achievement, but rather a historic ethical fiasco, a deeply flawed experiment on unborn human beings. What made it possible for a rogue scientist with no medical training to covertly and recklessly alter the genes of babies? What does the future hold now that the first members of the CRISPR generation have been born?
In The CRISPR Generation, Dr. Kiran Musunuru takes the reader through an insider's view of the history of the gene-editing field, key discoveries about how gene editing can be used to prevent and treat diseases like AIDS and heart attacks, a full account of the events surrounding Dr. He's revelation to the world, a dissection of Dr. He's scientific and ethical lapses, and a look ahead to the consequences of gene editing for humankind, both good and bad. Gene-editing technology has the potential to cause untold damage if taken up by the wrong hands and used irresponsibly. But it also promises to be a boon for the health of patients otherwise destined for disease and suffering.

An actively practicing cardiologist and committed teacher, Kiran Musunuru, MD, PhD, MPH, ML, is a professor and genetics researcher at University of Pennsylvania. He is working to create a one-shot "vaccination" against heart attacks, the leading cause of death worldwide. He is a recipient of the Presidential Early Career Award for Scientists and Engineers from the White House, the American Heart Association's Award of Meritorious Achievement, the American Philosophical Society's Judson Daland Prize for Outstanding Achievement in Clinical Investigation, the American Federation for Medical Research's Outstanding Investigator Award, and Harvard University's Fannie Cox Prize for Excellence in Science Teaching.