A Gift for Treason: The Cultural Marxist Assault On Western Civilization (Paperback) 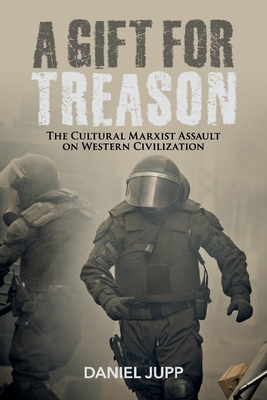 By Daniel Jupp
Email or call for price.
Special Order

A Gift for Treason: The Cultural Marxist Assault on Western Civilization gives a traditionalists reading of the nature of Western Civilization and the Cultural Marxist threat it currently faces. It tackles the issues surrounding Western identity and culture, explaining the key historical movements and political principles which define Western identity. It combines discussions of our cultural debts to Ancient Greece, Rome and to Christianity with descriptions of the ideology which seeks to destroy this intellectual and cultural heritage. For anyone unsure of what we mean by Western Civilization, or what it is about the heritage of the West that is so important, this book offers a reminder of past greatness. To those concerned by radical contemporary political movements and their vicious hatred of the West, this book describes what we have to lose if we do not defend our inheritance.

Daniel Jupp is a working class white heterosexual Englishman. He never intended to represent everything the Left despises but acquired that status by birth. He was the first person in his family to ever go to university, where he successfully resisted instructions to hate himself and his country. He can be regularly found relaxing by exchanging vitriolic insults with total strangers on social media. He is married to a long suffering wife and the proud father of two children. He is a patriot in an age of treason, a gentleman prone to foul language, a rationalist, a nationalist and a mediocre but enthusiastic swordsman. His ambition is to live in the 19th century or recreate the British Empire. Failing these he would like to be left alone, with a good supply of biscuits.