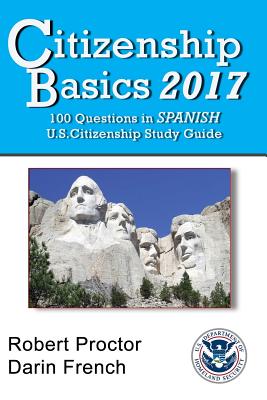 If you only need to study for the 100 Civics Questions for the United States Citizenship and Naturalization Interview and you need Spanish translations, then CITIZENSHIP BASICS 2017: 100 Questions in Spanish is the best choice.

Robert Proctor and Darin French have worked for the past 20 years helping people learn English and prepare for their U.S. Citizenship Interviews. Robert Proctor has taught citizenship and English as a Second Language classes in Los Angeles since 1996 and has helped hundreds of immigrants to pass their U.S. citizenship interviews. He is the co-author of several citizenship and ESL textbooks which are used by school districts, citizenship programs, and students across the United States. Robert regularly gives presentations at ESL/Citizenship conferences and workshops. Mr. Proctor received his degree from the University of California at Santa Barbara is a credentialed ESL and Citizenship Instructor for the Los Angeles Unified School District. Darin French taught U.S. History, Government, Basic Language Arts, ESL and ESL/Citizenship for the Los Angeles Unified School District for eight years. He started Southern California Educational Services in 2012 and has written, produced, and published numerous citizenship and English language textbooks. He has He has also served as a CBET coordinator, ESL teacher advisor, and participated on several textbook selection committees and WASC accreditation teams. He received his BA in History and Political Science from the University of California at Los Angeles.