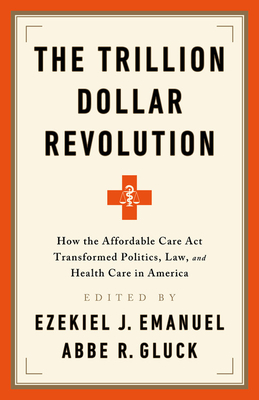 Ten years after the landmark legislation, Ezekiel Emanuel leads a crowd of experts, policy-makers, doctors, and scholars as they evaluate the Affordable Care Act's history so far.
In March 2010, the Affordable Care Act officially became one of the seminal laws determining American health care. From day one, the law was challenged in court, making it to the Supreme Court four separate times. It transformed the way a three-trillion-dollar sector of the economy behaved and brought insurance to millions of people. It spawned the Tea Party, further polarized American politics, and affected the electoral fortunes of both parties.
Ten years after the bill's passage, a constellation of experts--insiders and academics for and against the ACA--describe the momentousness of the legislation. Encompassing Democrats and Republicans, along with legal, financial, and health policy experts, the essays here offer a fascinating and revealing insight into the political fight of a generation, its consequences for health care, politics, law, the economy-and the future.

Ezekiel J. Emanuel is the Vice Provost for Global Initiatives, the Diane v.S. Levy and Robert M. Levy University Professor, and Co-Director of the Healthcare Transformation Institute at the University of Pennsylvania. He is also the Special Advisory to the Director General of the World Health Organization. From January 2009 to January 2011, he served as special advisor for health policy to the director of the Office of Management and Budget in the White House. From 1997 to 2011, he was chair of the Department of Bioethics at the National Institutes of Health. He is also a breast oncologist.
He is a member of the National Academy of Medicine, the American Association of Arts and Sciences and won the Dan David Prize for medical ethics in 2019.
Dr. Emanuel has written and edited 14 books and over 300 articles, and is the world's most cited bioethicist. He is currently a opinion contributor for the New York Times. He appears regularly on television shows.

Abbe R. Gluck is a Professor of Law and the founding Faculty Director of the Solomon Center for Health Law and Policy at Yale Law School. She is also Professor of Internal Medicine at Yale Medical School and a Professor in the Institution for Social and Policy Studies at Yale. Gluck is an expert on Congress, federalism, litigation, and health law and is the author of more than 60 articles in law, health and mainstream publications, as well as the author of a leading legislation casebook. After graduation from Yale Law School, Gluck clerked for U.S. Supreme Court Justice Ruth Bader Ginsburg and worked on the senior staffs in the administrations of NYC Mayor Michael Bloomberg and NJ Governor Jon Corzine. Gluck filed influential amicus briefs in all of the major ACA challenges.