The Human Tide: How Population Shaped the Modern World (Hardcover) 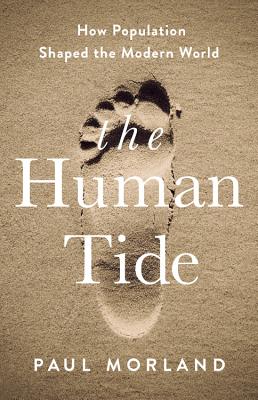 A dazzling new history of the irrepressible demographic changes and mass migrations that have made and unmade nations, continents, and empires

The rise and fall of the British Empire; the emergence of America as a superpower; the ebb and flow of global challenges from Nazi Germany, Imperial Japan, and Soviet Russia. These are the headlines of history, but they cannot be properly grasped without understanding the role that population has played.

The Human Tide shows how periods of rapid population transition -- a phenomenon that first emerged in the British Isles but gradually spread across the globe--shaped the course of world history. Demography -- the study of population -- is the key to unlocking an understanding of the world we live in and how we got here.

Demographic changes explain why the Arab Spring came and went, how China rose so meteorically, and why Britain voted for Brexit and America for Donald Trump. Sweeping from Europe to the Americas, China, East Asia, the Middle East, and North Africa, The Human Tide is a panoramic view of the sheer power of numbers.

Dr. Paul Morland is associate research fellow at Birkbeck College, University of London and a renowned authority on demography. He lives in London with his wife and has three children. A French speaker with dual German and British citizenship, Paul Morland also spends much time at his home in the French Pyrenees.

He was educated at Corpus Christi College, Oxford, from where he graduated with a first class B.A. (Hons) in PPE. He graduated with Distinction in his Masters in International Relations, also from Oxford University, and was awarded his Ph.D from the University of London. The Human Tide is his first trade book but as well as an academic work on demography, published by Ashgate / Routledge, he has contributed a number of comment pieces on demography to newspapers in the UK and Israel.

"An illuminating perspective on the history and likely future of population trends."
—STARRED REVIEW,BOOKLIST

"Morland's real skill is linking economic, political, military and
cultural trends to the demographic story...lucid, jargon-free and full of neat
observations...The future, Morland concludes, is grey (societies that grow old
before they grow rich), green (as global population declines, humans will need
less land and fewer resources) and much less white (because of more rapid
growth of non-European populations and immigration into majority white countries)...
this is an admirable introduction to a vital subject."

"A global history that gallops from 1800 and Brexit to Donald Trump's
wall, seen through the prism of births, deaths and migration... The Human Tide is
packed with information...This is, deliberately, a book for those with little
knowledge of demography...What are fascinating are the author's projections of
where we are heading demographically. To an older population in the UK
certainly: the number of people over 85 will treble in 30 years as the
baby-boomers age. That means a more indebted nation, but it could also mean a
more peacefully inclined one"

"Engrossing...How many people live in a place, how old they are and how
hungry they are, explains a lot about how their rulers behave, he argues. Do
you have a fast-growing young population like late-19th-century Germany? Your
neighbours will fear you. An imploding birth rate, like modern Italy? Your
economy will probably shrink too. It's not a new idea but Morland offers plenty
of evidence to prove just how much it matters...This book adds to the debate about
the basic causes of history."


—BOOK OF THE WEEK, EVENING STANDARD

"Morland shows how history has been driven not only by science and
economics, but by birth, sex, life, and death. An essential read for anyone
seeking to understand not only the human tide, but the tide of history.
Gripping, authoritative, and compelling."

—Richard V. Reeves, author of Dream Hoarders: How the American UpperMiddle Class Is Leaving Everyone Else in the Dust, Why That Is a Problem, andWhat to Do About It

"Demographic change underlies most of the trends of our time, from controversies over immigration to the challenge of funding welfare states. In The Human Tide, Paul Morland provides an erudite and entertaining overview of the influence of population trends on history."—Michael Lind, author of Land of Promise: An Economic History of theUnited States

"Paul Morland has rudely awakened us to the hidden hand of demography in
shaping history and politics in the modern world. Morland's superb
political-demographic history of the world alerts us not only to how manpower
matters, but why the perception of population shifts may be even more
consequential than the shifts themselves. If you want to understand our times,
you must read this book."

"A fascinating account of how much sheer population numbers have
mattered in human history---and why major
demographic upheavals, happening now and over the next few decades, are going
to affect us all."

"Population has been historically one of the key factors that has defined the relations between states. As Paul Morland shows, it has now become the defining factor for the political dynamics within states. The Human Tide shows that we live in an age of hard and soft demographic engineering."—Ivan Krastev, chairman of the Centre for Liberal Strategies in Sofia