The Rise of the Creative Class (Paperback) 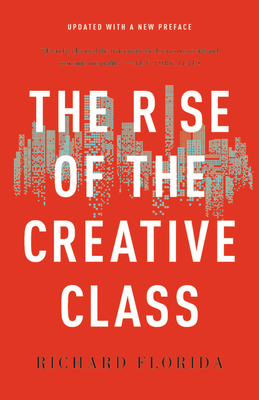 World-renowned urbanist Richard Florida's bestselling classic on the transformation of our cities in the twenty-first century -- now updated with a new preface
In his modern classic The Rise of the Creative Class, urbanist Richard Florida identifies the emergence of a new social class reshaping the twenty-first century's economy, geography, and workplace. This Creative Class is made up of engineers and managers, academics and musicians, researchers, designers, entrepreneurs and lawyers, poets and programmer, whose work turns on the creation of new forms. Increasingly, Florida observes, this Creative Class determines how workplaces are organized, which companies prosper or go bankrupt, and which cities thrive, stagnate or decline.
Florida offers a detailed occupational, demographic, psychological, and economic profile of the Creative Class, examines its global impact, and explores the factors that shape "quality of place" in our changing cities and suburbs. Now updated with a new preface that considers the latest developments in our changing cities, The Rise of the Creative Class is the definitive edition of this foundational book on our contemporary economy.

Richard Florida is university professor in the University of Toronto's School of Cities and Rotman School of Management, a distinguished visiting fellow at NYU's Schack Institute of Real Estate, and the cofounder and editor at large of the Atlantic's CityLab.

"[Florida's] ideas about revitalizing cities by attracting artists and high-tech workers have influenced a generation of urban planners."—Time

"Florida's book leaves the reader not just with some interesting ideas but with a new perspective for understanding our culture....Well worth reading if you're seeking a greater understanding of the sociological and economic changes taking place in our culture today...interesting, provocative, and smart."—Boston Globe

"An important book for those who feel passionately
about the future of the urban center. [Florida] changed the framework for
discussing social and economic inequality."—New York Times

"Ten years later, [Florida's original] book seems
prescient. For the first time, being different is more prized than fitting in
and black-and-white thinkers are being left behind."—Business Insider

"Prof. Florida's book is an
intellectual tour de force, scholarly yet colorfully written, with interest to
members of the creative class."—Globe and Mail

"Florida draws a vivid
picture of what it takes to make a great 21st-century city."—Denver Post

"A vibrant and fast-paced
romp... Florida's research and experiences over the past decade have given him
the foundation on which to build a new view of business reality..."—InformationWeek

"A pioneering
cartographer of talent."—Fast Company

"A smart and interesting
book that takes a well-known cultural phenomenon...the critical massing of
technology and creative workers of talent in certain cities...and mixes in some
new elements about why they cohere."—AlterNet

"A powerful, insightful
book that reveals the core of regional advantage in the knowledge economy.
Never before have I seen anyone capture so succinctly the values and desires of
the new 'creative class' and the essence of human capital and the creative ethos.
This is a book you will read cover to cover and feel enlightened by every
chapter."—John Seely Brown, Former Director, Xerox Palo AltoResearch Center (PARC), and co-author of The Social Life of Information

"The Rise of the Creative Class is an insightful portrait of the values and lifestyles that will drive the 21st century economy, its technologies and social structures. To understand how scientists, artists, entrepreneurs, venture capitalists and other self-motivated, creative people are challenging the traditional structures of the 20th century society, read this book. It will convince you that success in the future is not about technology, government, management or even power; it is all about people and their dynamic and emergent patterns of relationships."—Lewis M. Branscomb, John F. Kennedy School ofGovernment, Harvard University

"Few people provide greater clarity on the importance of place in the knowledge-driven economy than Richard Florida. The Rise of the Creative Class provides critical insights in how we can build 21st-century cities and regions around the emerging economy."—Robert D. Yaro, President, Regional Plan Association,New York