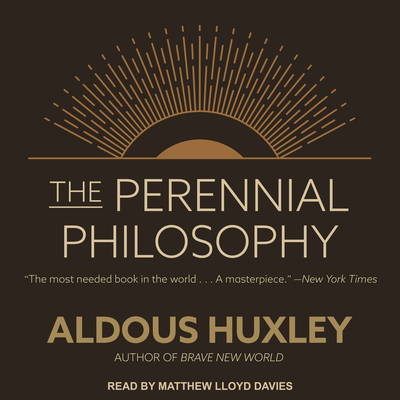 By Aldous Huxley, Matthew Lloyd Davies (Narrated by)
$29.99
Email or call for price.

The Perennial Philosophy, Aldous Huxley writes, may be found among the traditional lore of peoples in every region of the world, and in its fully developed forms it has a place in every one of the higher religions. With great wit and stunning intellect-drawing on a diverse array of faiths, including Zen Buddhism, Hinduism, Taoism, Christian mysticism, and Islam-Huxley examines the spiritual beliefs of various religious traditions and explains how they are united by a common human yearning to experience the divine. The Perennial Philosophy includes selections from Meister Eckhart, Rumi, and Lao Tzu, as well as the Bhagavad Gita, Tibetan Book of the Dead, Diamond Sutra, and Upanishads, among many others.