Forged in War: How a Century of War Created Today's Information Society (Hardcover) 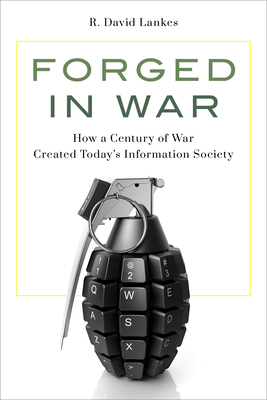 By R. David Lankes
Email or call for price.

Many of what we think of as Information Age tools and media --- computers, cell phones, the internet, encryption, and more --- evolved directly out of modern warfare. These tools started with World War I (which began not with arms, but with England cutting off underwater cables to Germany and isolating it), accelerated through World War II and the Cold War, and now play a center role in both declared and non-declared conflicts like election interference and cyberbattles. We buy phones and smart speakers because they are new and unlock great potential. Voice assistants like Siri and Alexa help us do our work and answer that one piece of trivia that bugs us. Yet these devices are data gatherers. They collect, repackage, and monetize our questions, purchases, photographs, web surfing to form a data industry now larger than the oil industry. Well over 100 years ago the data industry put in place a business model that trades our attention for news and entertainment. That model has evolved into a complex art and science of message targeting and content ownership that has splintered communities while simultaneously concentrating media ownership to a few massive corporations. Forged in War takes a critical look at the systems we use and how we ended up in a society that values data over personal liberty and commerce over the public good. It tells a compelling and previously story of how our ideas of information and knowledge reflect the century of war that has militarized our worldview. Author David Lankes's work has been funded by organizations such as The MacArthur Foundation, The Institute for Library and Museum Services, NASA, The U.S. Department of Education, The U.S. Department of Defense, The National Science Foundation, and The U.S. State Department. This, his latest book will help all of us learn how war has shaped our world and how to begin to create an agenda to stand down weaponized data and a media that seeks to own our personal, even intimate data like one owns a gold mine.

R. David Lankes is a professor and the director of the University of South Carolina's School of Library and Information Science. Lankes has always been interested in combining theory and practice to create active research projects that make a difference. His work has been funded by organizations such as The MacArthur Foundation, The Institute for Library and Museum Services, NASA, The U.S. Department of Education, The U.S. Department of Defense, The National Science Foundation, The U.S. State Department, and The American Library Association. Lankes is a passionate advocate for libraries and their essential role in today's society, earning him the American Library Association's Ken Haycock Award for Promoting Librarianship in 2016. He also seeks to understand how information approaches and technologies can be used to transform industries. In this capacity he has served on advisory boards and study teams in the fields of libraries, telecommunications, education, and transportation including at the National Academies. He has been a visiting fellow at the National Library of Canada, The Harvard School of Education, and was the first fellow of ALA's Office for Information Technology Policy. His book The Atlas of New Librarianship won the 2012 ABC-CLIO/Greenwood Award for the Best Book in Library Literature.