The Corpus Hermeticum: Initiation Into Hermetics, The Hermetica Of Hermes Trismegistus (Paperback) 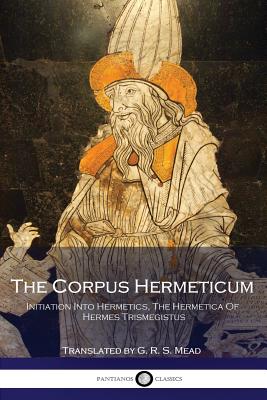 This complete edition of the Corpus Hermeticum, which introduces in eighteen chapters the religious and philosophical principles of Hermetics, was translated by G. R. S. Mead.
Hermetics is a religious, philosophical, and esoteric practice based around the beliefs and writings of the pagan priest Hermes Trismegistus. Influential for its distinct beliefs and characteristics, Hermeticism carried a profound influence over the Renaissance in Europe. Many Christian believers paid it heed, with much art depicting the Hermetic belief system appearing between the 14th and 17th centuries in particular.
Notably, Hermetics claims to be a descended version of the prisca theologia - a principle which affirms there is but one, true theology in the world. This essence of the divine is present in all religions, and was according to legend given to mankind in distant antiquity. This belief, discussed by Hermes Trismegistus, has led many scholars of philosophy and religion to examine Hermetics in detail.
Hermeticism remains an esoteric interest which attracts a modest amount of attention around the world. As an introduction to the tradition, The Corpus Hermeticum is beyond doubt a good starting point. It introduces and distinguishes the main pillars of Hermeticism in a manner easily comprehended, and is itself a primary source.
This translation by G. R. S. Mead originally appeared in 1906, and has been considered authoritative and faithful to the ancient Hermetic texts ever since.