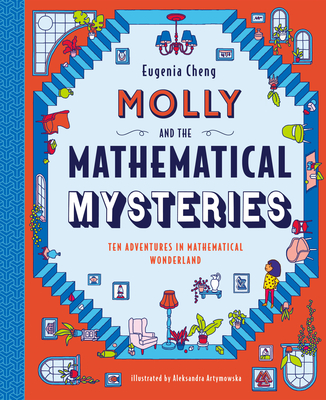 Find the clues and lift the flaps on this mathematical mystery!

Join Molly as she ventures into a curious world where nothing is quite as it seems. A trail of clues leads from scene to scene, presenting Molly with a number of challenges. But who is leaving the clues, and where will they lead? This interactive mystery shows math isn't just about numbers—it’s about imagination! An explorative and creative approach to the world of mathematics.

Eugenia Cheng is a mathematician, pianist, and lecturer. She is passionate about ridding the world of math-phobia. Eugenia’s first book, How to Bake Pi, has been an international success. Molly’s Mathematical Adventure is her first children's book.

Aleksandra Artymowska is an illustrator, graphic designer, and painter from Poland. She graduated from the Academy of Fine Arts in Warsaw in 2005 and received the Provost Award. She now splits her time between Poland and Israel.

Prompted by a note hidden beneath a flap, Molly finds herself first in a world (with, significantly, a white rabbit) where select insides and outsides are inverted. Subsequent flaps see her finding and passing through further concealed doorways into an M.C. Escher–style “impossible staircase,” a maze with tessellated shapes, a set of infinitely receding hallways, and six more “implausible but not impossible” settings that likewise demonstrate some of math’s central tools and ideas—often in an interactive way that requires folding, recognizing patterns, or interlacing pre-cut elements. Artymowska fills her big, square illustrations with both clearly drawn examples of each main concept and smaller details to search out, such as sets of nesting dolls to match up.
—Kirkus Reviews (starred review)