Behind the Lines (Paperback) 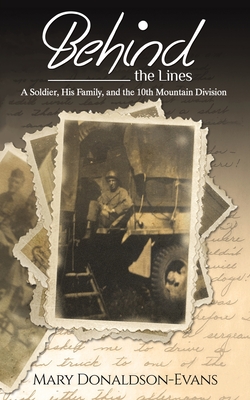 The year 2020 marks the 75th anniversary of the German surrender in World War II. The 10th Mountain Division, the army's first mountaineering unit, led the Allies to victory in Italy in 1945. Their soldiers are often celebrated for their heroism and ingenuity and remembered for their steep losses in the campaign to defeat Nazi Germany. Yet it has been estimated that no more than 14% of troops overseas in World War II ever saw combat.
Behind the Lines is the story of a 10th Mountain Division soldier from the other 86%, someone who toiled to deliver munitions and supplies to troops on the battlefront and who documented his experiences in letters home to his wife in Minnesota. Narrated by the soldier's daughter who, some 70 years later, finally read the correspondence between her parents and became acquainted with them as they were when she was a baby, the experiences of this soldier and of the wife he left behind reveal the day-to-day challenges of their plight, the tensions but also the unexpected rewards of their situation, and the all-too-common prejudices of a tumultuous era often dubbed 'heroic'. Behind the Lines mines the correspondence to describe the anguish and the longing of a young couple separated by a war that would change the course of modern civilisation.