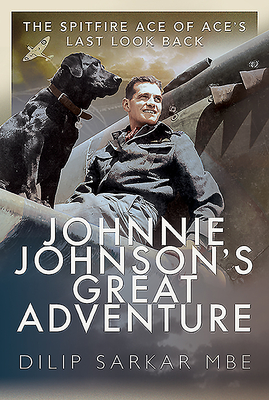 Air Vice-Marshal Johnnie Johnson - a policeman's son from Leicestershire - ended the Second World War as the RAF's top-scoring fighter pilot. Fearless, and an exceptional pilot and marksman, Johnnie was also highly intelligent and a gifted writer.

Having published two of his own books, Wing Leader and The Circle of Air Fighting, during the 1980s and 1990s, Johnnie co-authored several more with another fighter ace, namely Wing Commander P.B. 'Laddie' Lucas. In 1997, the 'AVM' suggested to his friend, the prolific author Dilip Sarkar, that the pair should collaborate on The Great Adventure - a book that would, in effect, be Johnnie's account of the 'Long Trek' from Normandy across Northern Europe into the heart of the Third Reich itself.

'Greycap Leader' was to produce a draft, after which Dilip would add the historical detail and comment. Sadly, the project was unfulfilled, because Johnnie became ill and passed away, aged eighty-five, in 2001. Years later, Johnnie's eldest son, Chris, discovered the manuscript among his esteemed father's papers. In order to keep Johnnie's memory evergreen, Chris turned to Dilip to finally see the project through to its conclusion.

In this book, Johnnie revisits certain aspects of his wartime service, including the development of tactical air cooperation with ground forces; his time as a Canadian wing leader in 1943, when the Spitfire Mk.IX at last outclassed the Fw 190; and details his involvement in some of the most important battles of the defeat of Nazi Germany, including Operation Overlord and the D-Day landings in 1944, Operation Market Garden and the airborne assault at Arnhem, and the Rhine Crossings, throughout all of which Johnnie also commanded Canadian wings. Here, then, we have Johnnie Johnson's Great Adventure - 'Greycap Leader's' previously unpublished last look back.