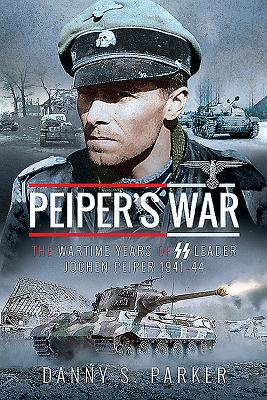 This is a well-researched work with detailed footnotes. The photograph section is invaluable in appreciating the destruction wrought by Peiper in Russia and Italy. -- ARMOR Magazine

'A bad reputation has its commitments.' So wrote home Jochen Peiper from the fighting front in the East in 1943, characterizing his battle-hardened command during the Second World War. Peiper's War is a new serious work of military history by the renowned author Danny S. Parker which presents a unique view off the Second World War as seen from a prominent participant on the dark side of history.

The story follows the wartime career of Waffen SS Colonel Jochen Peiper, a handsome Aryan prodigy who was considered a hero in the Third Reich. Peiper had been Heinrich Himmler's personal adjutant in the early years of the war, and, having procured a field command in Hitler's namesake fighting force, the Leibstandarte Adolf Hitler, he become famous for a flamboyant and brutal style of warfare on the Eastern Front. There, in his sphere, few prisoners were taken, and motives of racial genocide were never far from unspoken orders.

Transferred to the west, Peiper's battlegroup incinerated a tiny town in Northern Italy and killed the village mayor and priest. Being well-connected to Himmler and other generals of the period, Peiper finds a place in the narrative as a storied witness to the inner workings of the Nazi elite along with other prominent SS officers such as Kurt Meyer.

In this meticulously researched work, we witness the apex and then death spiral of Nazi military intentions as Peiper fights for Germany across every front in the conflict. Peiper's War provides a telling inside look at Hitler's war and then how the dark secrets of his security-minded command were improbably unearthed at the end of the conflict by an obscure top-secret surveillance facility in the United States.