Punk Rock Unicorn: Another Phoebe and Her Unicorn Adventure (Paperback) 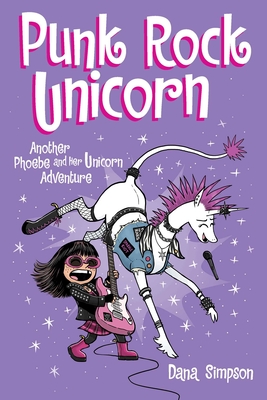 This is book number 17 in the Phoebe and Her Unicorn series.

Break out your purple hair dye and set your guitar amps to full blast in this rocking new collection of Phoebe and Her Unicorn comics by bestselling author Dana Simpson.

Phoebe Howell and her unicorn best friend, Marigold Heavenly Nostrils, are headed to music camp for the summer, where they form a punk rock group with fellow campers Sue and Stevie. Marigold also discovers a portal to a parallel dimension where she and Phoebe come face-to-face with the dark and sinister versions of themselves. Throughout their magical and musical adventures, the best friends learn about the value of friendship, following your heart, and rocking your hardest in this sparkling new collection of Phoebe and Her Unicorn comics by award-winning author Dana Simpson.
.