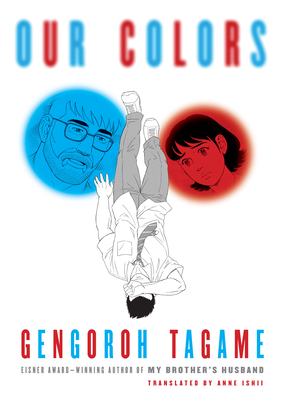 Set in contemporary suburban Japan, Our Colors is the story of Sora Itoda: a sixteen-year-old aspiring painter who experiences his world in synesthetic hues of blues and reds, governed by the emotional turbulence of being a teenager. He wants to live honestly as a young gay man in high school, but that is still not acceptable in Japanese society. His best friend and childhood confidant is Nao, a young woman whom everyone thinks is (or should be) his girlfriend; and it would be the easiest thing to play along—she knows he is gay but knows, too, how hard it is to live one’s truth in their situation.

Sora’s world changes forever when he meets Mr. Amamiya, a middle-aged gentleman who is the owner and proprietor of a local coffee shop, and who is completely, unapologetically out as a gay man. A mentorship and friendship ensues, as Sora comes out to him and agrees to paint a mural in the shop, and Mr. Amamiya counsels him (platonically) about how to deal with who he is. But it won’t be easy. Mr. Amamiya paid a high price for his freedom of identity, and when a figure from his past suddenly appears, it becomes a prime example of just how complicated life can be.

GENGOROH TAGAME was born in 1964 and lives in Tokyo. After graduating from Tama University of Art, Tagame worked as an art director while writing manga and prose fiction, contributing illustrations for various magazines. In 1994 he cofounded the epochal G-Men Magazine, and by 1996 he was working full-time as an openly gay artist. He is the author of dozens of graphic novels and stories, which have been translated into English, French, Italian, and Korean. His artwork has been exhibited in galleries across Europe and America. His first all-ages title, My Brother’s Husband, earned him the Japan Media Arts Festival Award for Outstanding Work of Manga from the Agency for Cultural Affairs. In 2018 it received the Eisner Award for Best U.S. Edition of International Material—Asia.

"Rich with visual metaphors, Tagame’s cartooning masterfully reveals the inner life his protagonist battles to conceal.”
—R. Kikuo Johnson, author of No One Else

“Only Tagame could create this deeply moving and original story that at first seems to be about an older gay man mentoring a younger one—and instead, becomes about how they help each other heal.”
—Alexander Chee, author of How to Write an Autobiography

“Our Colors is a beautiful coming-of-age story describing the complicated inner feelings of characters whose coming out narratives are at least as nuanced as their day-to-day relationships with each other. This is a world full of grace and tenderness for people at all stages of coming into their own.”
—Bowen Yang, writer and actor, “Saturday Night Live”

"Tagame returns with an affecting coming-of-age/coming-out saga, presented in 21 episodic chapters . . . Tagame’s intimate narrative mixes pathos with a healthy dose of melodrama, and his supremely confident artwork, replete with genial character designs and dynamic panel compositions, lend it gravitas. It’s a poignant story that should delight devotees of queer comics, with nice crossover appeal for YA readers."
—Publishers Weekly

"The Eisner Award–winning Japanese author of dozens of graphic novels and short stories translated into multiple languages, Tagame tells the story of an artist dreamer named Sora Itoda struggling to negotiate high school as a young gay man, who keeps up the pretense that friend Nao is his girlfriend until he meets openly gay Mr. Amamiya, a middle-aged coffee shop owner who becomes Sora’s mentor. But Mr. Amamiya has his own painful past to confront."
—Library Journal