Corporate Crime and Punishment: The Crisis of Underenforcement (Hardcover) 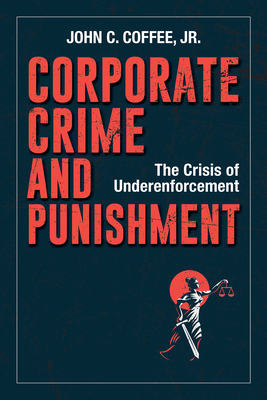 In the early 2000s, federal enforcement efforts sent white collar criminals at Enron and WorldCom to prison. But since the 2008 financial collapse, this famously hasn't happened. Corporations have been permitted to enter into deferred prosecution agreements and avoid criminal convictions, in part due to a mistaken assumption that leniency would encourage cooperation and because enforcement agencies don't have the funding or staff to pursue lengthy prosecutions, says distinguished Columbia Law Professor John C. Coffee. "We are moving from a system of justice for organizational crime that mixed carrots and sticks to one that is all carrots and no sticks," he says.

He offers a series of bold proposals for ensuring that corporate malfeasance can once again be punished. For example, he describes incentives that could be offered to both corporate executives to turn in their corporations and to corporations to turn in their executives, allowing prosecutors to play them off against each other. Whistleblowers should be offered cash bounties to come forward because, Coffee writes, "it is easier and cheaper to buy information than seek to discover it in adversarial proceedings." All federal enforcement agencies should be able to hire outside counsel on a contingency fee basis, which would cost the public nothing and provide access to discovery and litigation expertise the agencies don't have. Through these and other equally controversial ideas, Coffee intends to rebalance the scales of justice.

John C. Coffee Jr. is the Adolf A. Berle Professor of Law and director of the Center on Corporate Governance at Columbia Law School. He is a fellow at the American Academy of Arts and Sciences and has been repeatedly listed by the National Law Journal as among its "100 Most Influential Lawyers in America." Coffee has worked as a reporter for the American Law Institute on its Corporate Governance Project and has served on the Legal Advisory Board to the New York Stock Exchange and the SEC's advisory committee on the capital formation and regulatory processes. He is the author or coauthor of seven books, including thirteen editions of his securities casebook.

“Corporate Crime and Punishment is a great book that more than any other recent volume deftly explains why effective prosecution of corporate senior executives largely collapsed in the post-2007–2009 stock market crash period and why this creates a crisis of underenforcement. No one is Professor Coffee’s equal in tying together causes for the crisis as disparate as the Justice Department’s 2005 defeat by the Supreme Court in the Arthur Andersen case, the shock of the defeat of the United States Attorney in the Bear Stearns case in 2008, the abdication of any prosecution with respect to Lehman Brothers’ bankruptcy in 2008, with such underlying causes as differences in resources between the government and private litigants, misplaced focus on corporations as defendants rather than senior executives, and the rise of deferred prosecution and nonprosecution agreements that allow corporations to investigate themselves with the predictable result that few senior executives are characterized as responsible. Coffee concludes his book with several thoughtful proposals to dramatically improve our system of corporate accountability. While he acknowledges these will be vehemently opposed by the business community, each of his proposals is well worth considering.”
—Joel Seligman, author, historian, former law school dean, and President Emeritus, University of Rochester