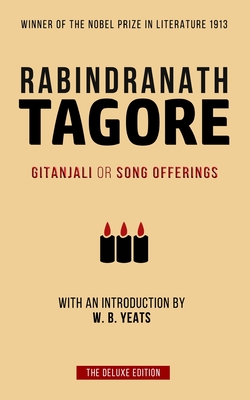 Written by the most famous Bengali poet, philosopher, social reformer, and dramatist who came into international prominence when he was awarded the Nobel Prize for literature in 1913. For the Bengali public, Tagore has been, and remains, an altogether exceptional literary figure, towering over all others. His poems, songs, novels, short stories, critical essays, and other writings have vastly enriched the cultural environment in which hundreds of millions of people live in the Bengali-speaking world, whether in Bangladesh or in India. - Amartya Sen, Harvard University and Nobel Prize in Economics in 1998 Formerly issued in a limited edition by the India Society in 1912. This edition was first published by Macmillan & Co. in March 1913. This text was retrieved from the digitized version of Gitanjali available in the internet archive of the University of Toronto. The hard copy of this version was presented to the Library of the University of Toronto by Lord Falconer from the books of the late Sir Robert Falconer, President of the University of Toronto, 1907-1932. A COLLECTION OF PROSE TRANSLATIONS MADE BY THE AUTHOR FROM THE ORIGINAL BENGALI.

Rabindranath Tagore or simply Rabindranath as he is known in India, was born into an affluent and brilliantly talented Calcutta family on May 7, 1861. The house in which Rabindranath grew up was the home of a vast joint, or extended, family; there were sometimes as many as 200 Tagores living in the complex known as Jorasanko, in northern Calcutta. These included the painters Abinindranath and Gaganendranath and, among Rabindranath's own 11 elder brothers and sisters, the writer and philosopher Dvijendranath, the musician Jyotirindranath, and Bengal's first woman novelist, Svarnakumari Devi, who also edited a literary magazine. His ideas of Asia's unity, and later of the unity of the world, and his longing for personal freedom were both expressed in his continual and almost compulsive travel-to Japan, China, Europe, and the United States. In all of these places he lectured and wrote, and it was on one trip to England in 1912 that he fatefully found himself in the company of William Butler Yeats and Ezra Pound. He had prepared some prose versions of his Bengali collection of poems called Gitanjali (Song Offerings), religious poems for the most part of a lyrical and devotional sort very much akin to the songs of the ancient Hindu sect called Vaishnava. These he read to Yeats, who was entranced by them; and Pound, then representing Harriet Munroe's Poetry magazine of Chicago, cabled the editor to hold the next edition for the inclusion of some "very wonderful" poems by Tagore. Gitanjali was then published as a book, with an introduction by Yeats, and in 1913 came the Nobel Prize.