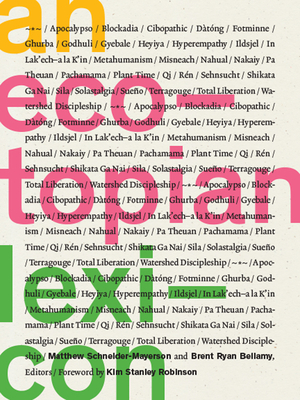 As the scale and gravity of climate change becomes undeniable, a cultural revolution must ultimately match progress in the realms of policy, infrastructure, and technology. Proceeding from the notion that dominant Western cultures lack the terms and concepts to describe or respond to our environmental crisis, An Ecotopian Lexicon is a collaborative volume of short, engaging essays that offer ecologically productive terms—drawn from other languages, science fiction, and subcultures of resistance—to envision and inspire responses and alternatives to fossil-fueled neoliberal capitalism.

Each of the thirty suggested “loanwords” helps us imagine how to adapt and even flourish in the face of the socioecological adversity that characterizes the present moment and the future that awaits. From “Apocalypso” to “Qi,”  “ ~*~ “ to “Total Liberation,” thirty authors from a range of disciplines and backgrounds assemble a grounded yet dizzying lexicon, expanding the limited European and North American conceptual lexicon that many activists, educators, scholars, students, and citizens have inherited. Fourteen artists from eleven countries respond to these chapters with original artwork that illustrates the contours of the possible better worlds and worldviews.

Brent Ryan Bellamy studies and teaches science fiction, American literature and cultures, and energy humanities and is coeditor of Materialism and the Critique of Energy.

Kim Stanley Robinson is the author of nineteen science fiction novels, including the Mars trilogy.

"We understand that an era is ending, but we do not know what will happen after it. Maybe changing words from 70 thousand years ago helps us cope with reality."—Vogue Poland

"A fascinating collection of non-English or newly invented words that impart something of the complexities of everyday life in an era of warming skies and oceans, mass degradation, precarity, and insecurity, each of which also helps map a possible future."—Science Magazine

"A perfect artifact of our complicated present."—Los Angeles Review of Books

"The texts, which are written mostly by professorial types whose specialties include English literature, anthropology and environmental studies, range from the drearily academic to the gloriously weird. But the entries’ basic messages are: do not despair; be humble; get creative."—ArtReview Asia

"An Ecotopian Lexicon is a fascinating, thought-provoking book. It’s worth a read."—The Weekly Anthropocene

"How can we better locate, through a vocabulary no longer inspired by neoliberal capitalism, the escape route from the Anthropocene? The necessary words are in a book that is a utopia in the form of a dictionary: An Ecotopian Lexicon. The lexicon contains poetic, esoteric and exotic suggestions. The authors of the individual entries identify their ecological and ecopsychological potential... Do words like apocalypso, cibopathic, fotminne, blockadia, gyebale, sound strange? Of course, because they don't exist; but they could come in handy."—La Reppublica

"The climate crisis provides opportunity and impetus for humans to make some of the changes, big and small, that we need to continue to progress. An Ecotopian Lexicon provides us with some of the creativity, language and concepts we need to make these very necessary changes."—Language & Ecology

"The essays vary in their theoretical density, but the editors have curated what is, on the whole, a very approachable collection, and one that I can imagine being meaningful not just for scholars in the environmental humanities, but for environmentally conscious citizens outside the academy as well."—Ancillary Review of Books

"With the look and feel of a small coffee table book—including original artwork, loanwords highlighted in sage green, and suggestive ‘paths’ at the end of each entry to chart a less linear browsing experience—it invites and rewards re-reading. . . . There is so much work to do, and this book reminds us to use all the creative resources at our disposal to do that work as joyfully as possible."—ISLE

"An Ecotopian Lexicon offers a fresh mode of engaging."—Kenyon Review

"This delightful dictionary of differences also represents what might just be the best method we have for mapping the gaps in our conceptual landscape. On that basis, I recommend it wholeheartedly."—Extrapolation