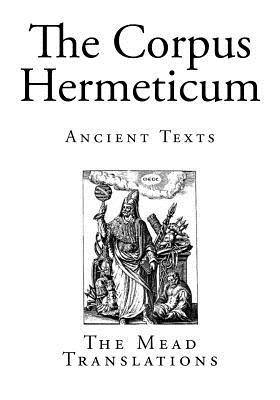 The Corpus Hermeticum - Ancient Texts - Translated by G.R.S. Mead - Introduction by John Michael Greer - The fifteen tractates of the Corpus Hermeticum, along with the Perfect Sermon or Asclepius, are the foundation documents of the Hermetic tradition. Written by unknown authors in Egypt sometime before the end of the third century C.E., they were part of a once substantial literature attributed to the mythic figure of Hermes Trismegistus, a Hellenistic fusion of the Greek god Hermes and the Egyptian god Thoth. This literature came out of the same religious and philosophical ferment that produced Neoplatonism, Christianity, and the diverse collection of teachings usually lumped together under the label "Gnosticism": a ferment which had its roots in the impact of Platonic thought on the older traditions of the Hellenized East. There are obvious connections and common themes linking each of these traditions, although each had its own answer to the major questions of the time. The treatises we now call the Corpus Hermeticum were collected into a single volume in Byzantine times, and a copy of this volume survived to come into the hands of Lorenzo de Medici's agents in the fifteenth century. Marsilio Ficino, the head of the Florentine Academy, was pulled off the task of translating the dialogues of Plato in order to put the Corpus Hermeticum into Latin first. His translation saw print in 1463, and was reprinted at least twenty-two times over the next century and a half. The treatises divide up into several groups. The first (CH I), the "Poemandres", is the account of a revelation given to Hermes Trismegistus by the being Poemandres or "Man-Shepherd", an expression of the universal Mind. The next eight (CH II-IX), the "General Sermons", are short dialogues or lectures discussing various basic points of Hermetic philosophy. There follows the "Key" (CH X), a summary of the General Sermons, and after this a set of four tractates - "Mind unto Hermes", "About the Common Mind", "The Secret Sermon on the Mountain", and the "Letter of Hermes to Asclepius" (CH XI-XIV) - touching on the more mystical aspects of Hermeticism. The collection is rounded off by the "Definitions of Asclepius unto King Ammon" (CH XV), which may be composed of three fragments of longer works.