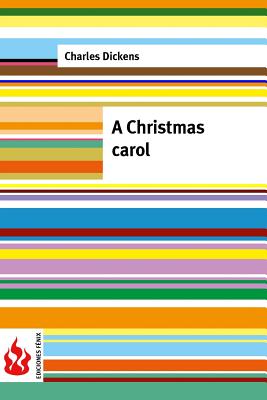 The tale begins on a "cold, bleak, biting" Christmas Eve exactly seven years after the death of Scrooge's business partner Jacob Marley. Scrooge, an old miser, is established within the first stave as "a squeezing, wrenching, grasping, scraping, clutching, covetous, old sinner " He hates Christmas, calling it "humbug"; he refuses his nephew Fred's Christmas dinner invitation, and rudely turns away two gentlemen who seek a donation from him to provide a Christmas dinner for the poor. His only "Christmas gift" is allowing his overworked, underpaid clerk Bob Cratchit Christmas Day off with pay - which he does only to keep with social custom, Scrooge considering it "a poor excuse for picking a man's pocket every 25th of December " At home that night, Scrooge is visited by Marley's ghost, who is forever cursed to wander the earth dragging a network of heavy chains, forged during a lifetime of greed and selfishness. Dickens describes the apparition thus: "Marley's face ... had a dismal light about it, like a bad lobster in a dark cellar." Marley has a bandage under his chin, tied at the top of his head; "... how much greater was his horror, when the phantom taking off the bandage round its head, as if it were too warm to wear indoors, its lower jaw dropped down upon its breast