Sonnets from the Portuguese (Paperback) 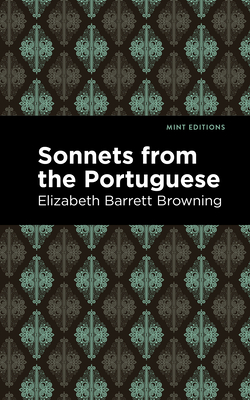 Sonnets from the Portuguese (1850) is a collection of sonnets by English poet Elizabeth Barrett Browning. Written between 1845 and 1846, Sonnets from the Portuguese is a series of love poems written by Browning to her husband, the prominent Victorian poet Robert Browning. Although Elizabeth was initially unsure of the poems, Robert encouraged their publication, suggesting she title them to make readers believe they were translations and not personal declarations of love between the couple. Using the sonnet, Browning adopted a traditional form made famous by Shakespeare while staking a claim for herself as one of nineteenth century England's premier poets.

Filled with references to the Greek pastoral poet Theocritus and the tragic figure Electra, as well as invocations to God, Sonnets from the Portuguese immerses itself in biblical and classical tradition while remaining deeply personal and authentically romantic. Sonnet "XV" addresses the inherent tragedy of love, the depth of sadness with which a lover beholds another with "Too calm and sad a face," overwhelmed with the knowledge that with love comes "the end of love, / Hearing oblivion beyond memory." In sonnet "XXVIII," Browning reflects on the distance between lovers kept apart: all she has of him are her letters, "all dead paper, mute and white " And yet, "they seem alive and quivering" in her "tremulous hands," a living reminder of the man she longs to be with. "XLIII," the most famous sonnet of the collection, begins "How do I love thee? Let me count the ways," and records the poet's confession of a love more powerful than "the passion put to use / In her] old griefs..." Not only has her lover brought her such joy, he has also given her a love she "seemed to lose / With her] lost saints," a love strong enough to transcend religious faith entirely, a love that is destined to last, and to be even "better after death."

With a beautifully designed cover and professionally typeset manuscript, this edition of Elizabeth Barrett Browning's Sonnets from the Portuguese is a classic of English literature reimagined for modern readers.