Kidnapped by a Client: The Incredible True Story of an Attorney's Fight for Justice (Hardcover) 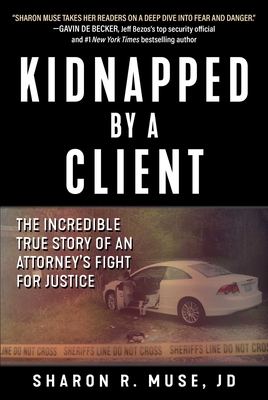 “He promised to kill me when he got out. I believed him. If I wanted justice, I had to fight both him and the courts...maybe kill him first. If I didn’t do something, I was going to die.”

This is not a manufactured dialogue from a thriller but the words of attorney Sharon Muse. They came after she survived an attempted kidnapping, rape, and murder at the hands of Larry Morrison, a former client. On April 7, 2006, Muse miraculously escaped from the sociopathic Morrison, only to find that the threat to her life was just beginning. Ineptitude in the justice system threatened to release Morrison and allow him the opportunity to finish the job, which he adamantly pledged to do. Muse would have to fight at every step to ensure her safety.

Muse would act as her own advocate, investigator, legal counsel, and bodyguard in the years following the event. Kidnapped by a Client covers the brutal kidnapping, two trials, two appeals, procedural errors galore, one Supreme Court reversal, and even Muse’s intricate plan to murder Morrison before he could get to her. Muse would not ultimately execute that plan, and she would emerge victorious in the legal battle thanks to her faith and her own determination and legal acumen. But her safety is not ensured: Morrison is up for parole in 2026. Muse regularly monitors his status.

Muse recounts her stranger-than-fiction story in Kidnapped by a Client.  Muse analyzes the failures of the legal system, the mistakes she made, the steps she took to protect herself, and how she has coped with trauma. Readers will find not only a compelling narrative, but also insight into how to protect oneself and ensure one’s own safety and well-being.

Sharon R. Muse, JD is the commonwealth attorney for Kentucky's 14th Judicial District. She has a BA in Psychology from the University of Kentucky, a Juris Doctorate degree from the University of Louisville, specialized training in the legal field, and extensive training in effects of trauma on the brain. She works with experts in self-protection, trauma, and grief counseling. Muse teaches classes and speaks to groups about self-protection and assists victims as they navigate the legal system.

“In 2006, Kentucky attorney Muse, the author of this harrowing, cautionary tale that juxtaposes crisp, clear writing with court transcripts, was kidnapped and beaten by Larry Morrison, a former client she barely remembered…. Though finally given life in prison, Morrison will be eligible for parole in 2026. Advice on how to be one’s own advocate is a bonus. This gripping, fast-paced account leaves the reader wondering: could this happen to me?”
—Publishers Weekly starred review

“Sharon Muse takes her readers on a deep dive into fear and danger.  As a trial attorney who becomes a crime victim, she shares a perspective few others can, and when she finds her voice and her power, she teaches others how to do the same.”
—Gavin de Becker, bestselling author, The Gift of Fear

“Sharon Muse's Kidnapped by a Client is a page-turning and terrifying account of an attorney's unimaginable ordeal of being kidnapped and nearly murdered by a dangerously obsessed former client. The author brings a keen eye and perceptive fast-paced recounting of the desperate battle, not only for her life, but for her case as it precariously wound its way through the court systems where justice can often be elusive.”
—Susan Fensten, author of You Have A Very Soft Voice, Susan: A Shocking True Story of Internet Stalking

“A thoroughly compelling true crime story—a brutal attack, an attorney victim expecting justice to be done, and her disturbing ride through the broken criminal justice system.  Sharon Muse's account of her long quest for justice and personal safety is gripping and multi-faceted, and a deeply insightful look into what it means to be a victim, an advocate, and a person striving for spiritual understanding in the face of violence and injustice.”
—Pamela Everett, author of Little Shoes: The Sensational Depression-Era Murders That Became My Family's Secret

“Muse takes the reader on a raw transparent journey into the depths of fear, the criminal justice system, and the faith to survive it - challenging readers to consider their own journeys and how to triumph over tragedy to thrive in a life of forgiveness.”
—Kyle Idleman, Senior Pastor at Southeast Christian Church and author of not a fan and Don’t Give Up