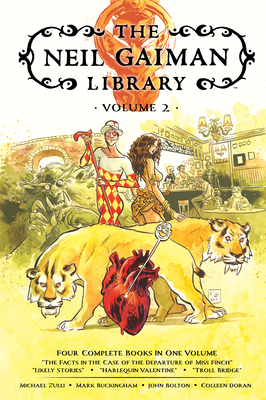 A deluxe oversized collection of comic stories from celebrated and award-winning writer Neil Gaiman, in conjunction with some of comics' most acclaimed creators.

In these four essential Gaiman tales, a group of friends search for a mysterious circus that is either a dream or nightmare, a string of bizarre occult events befall strangers from all walks of life, a woman is given the gift of a Harlequin's heart, and a young boy is followed by monsters and regrets that last a lifetime.

Collects the full graphic novels The Facts in the Case of the Departure of Miss Finch, Likely Stories, Harlequin Valentine, and Troll Bridge in a single deluxe hardcover volume with a dust jacket.

Neil Gaiman is the celebrated author of books, graphic novels, short stories, and films for readers of all ages. Some of his most notable titles include the groundbreaking #1 New York Times bestselling Sandman comics series (which garnered nine Eisner Awards and the World Fantasy Award for Best Short Story); The Graveyard Book (the first book ever to win both the Newbery and Carnegie medals); American Gods (which will soon be released as a television show in the US); and The Ocean at the End of the Lane, the UK's National Book Award 2013 Book of the Year. The film adaptation of How to Talk to Girls at Parties (directed by John Cameron Mitchell) will be in theaters in 2018.