Only the End of the World Again (Hardcover) 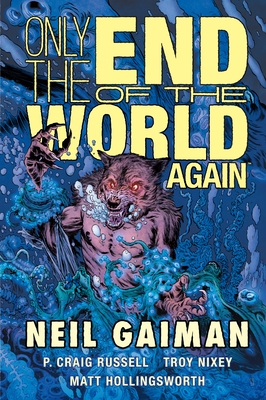 From the Hugo, Bram Stoker, Locus, World Fantasy, and Nebula award-winning, and New York Times bestselling writer Neil Gaiman (American Gods), this fantasy story blends the worlds of H.P. Lovecraft and Roger Zelazny. This new edition of Only the End of the World Again features a brand new cover, in a new deluxe hardcover format; with bonus material including high res scans of the inks and layouts.

The story features an adjustor, Lawrence Talbot who recently sets up shop in Innsmouth only to discover that the world may be ending and that the instrument of destruction is a werewolf.

Neil Gaiman was born in Hampshire, UK, and now lives in the United States near Minneapolis. As a child he discovered his love of books, reading, and stories, devouring the works of C.S. Lewis, J.R.R. Tolkien, James Branch Cabell, Edgar Allan Poe, Michael Moorcock, Ursula K. LeGuin, Gene Wolfe, and G.K. Chesterton. A self-described "feral child who was raised in libraries," Gaiman credits librarians with fostering a life-long love of reading: "I wouldn't be who I am without libraries. I was the sort of kid who devoured books, and my happiest times as a boy were when I persuaded my parents to drop me off in the local library on their way to work, and I spent the day there. I discovered that librarians actually want to help you: they taught me about interlibrary loans." Neil Gaiman's work has been honoured with many awards internationally, including the Newbery and Carnegie Medals. His books and stories have also been honoured with 4 Hugos, 2 Nebulas, 1 World Fantasy Award, 4 Bram Stoker Awards, 6 Locus Awards, 2 British SF Awards, 1 British Fantasy Award, 3 Geffens, 1 International Horror Guild Award and 2 Mythopoeic Awards.