Shadows on the Grave (Hardcover) 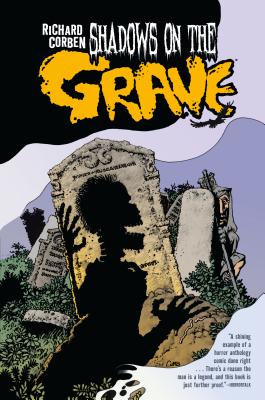 Richard Corben follows up 2014's Spirits of the Dead with a new collection of original short stories, ranging from gothic tales worthy of Poe, to Twilight Zone-style encounters with the weird, to a full-length fantasy epic featuring a barbarian reminiscent of Corben's most notorious creation, Den, immortalized in the 1981 animated film Heavy Metal.

Corben rose to prominence with short horror and science fiction stories in the early 1970s in Creepy and Eerie, which were later collected in Creepy Presents Richard Corben. He remains one of the most important voices in horror comics. In 2009 he won the Eisner for Best Miniseries as well as being named Spectrum's Grand Master, one of illustration's most prominent awards. In 2011 he won the Eisner for Best Oneshot, and the following year he was inducted in the Will Eisner Hall of Fame.

Richard Corben was born on a farm in Anderson, Missouri, and went on to get a bachelor of fine arts degree from the Kansas City Art Institute in 1965. After working as a professional animator, Corben started doing underground comics, including Grim Wit, Slow Death, Skull, Rowlf, Fever Dreams, and his own anthology Fantagor. In 1970 he began illustrating horror and science-fiction stories for Warren Publishing. His stories appeared in Creepy, Eerie, Vampirella, 1984, and Comix International. He also colored several episodes of Will Eisner's Spirit. In 1975, when Mœbius, Druillet, and Jean-Pierre Dionnet started publishing the magazine Métal Hurlant in France, Corben submitted some of his stories to them. He continued his work for the franchise in America, where the magazine was called Heavy Metal. In 1976 he adapted a short Robert E. Howard story in Bloodstar. In 2012 he was elected to the Will Eisner Award Hall of Fame.