Dark Matter and the Dinosaurs: The Astounding Interconnectedness of the Universe (Compact Disc) 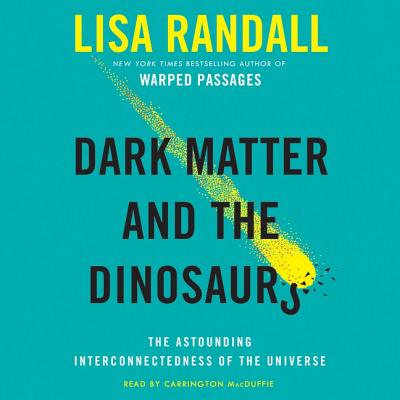 You have to love anyone who considers Dark Matter to be the George Clooney of the universe.

In this brilliant exploration of our cosmic environment, the renowned particle physicist and New York Times bestselling author of Warped Passages and Knocking on Heaven's Door uses her research into dark matter to illuminate the startling connections between the furthest reaches of space and life here on Earth.

Sixty-six million years ago, an object the size of a city descended from space to crash into Earth, creating a devastating cataclysm that killed off the dinosaurs, along with three-quarters of the other species on the planet. What was its origin? In Dark Matter and the Dinosaurs, Lisa Randall proposes it was a comet that was dislodged from its orbit as the Solar System passed through a disk of dark matter embedded in the Milky Way. In a sense, it might have been dark matter that killed the dinosaurs.

Working through the background and consequences of this proposal, Randall shares with us the latest findings--established and speculative--regarding the nature and role of dark matter and the origin of the Universe, our galaxy, our Solar System, and life, along with the process by which scientists explore new concepts. In Dark Matter and the Dinosaurs, Randall tells a breathtaking story that weaves together the cosmos' history and our own, illuminating the deep relationships that are critical to our world and the astonishing beauty inherent in the most familiar things.