The Afterlife of Enclosure: British Realism, Character, and the Commons (Paperback) 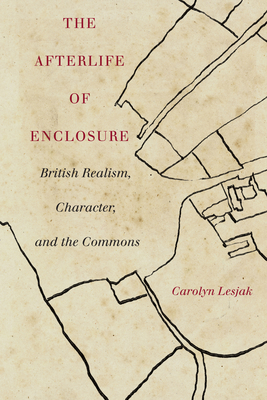 The enclosure of the commons, space once available for communal use, was not a singular event but an act of slow violence that transformed lands, labor, and basic concepts of public life leading into the nineteenth century. The Afterlife of Enclosure examines three canonical British writers--Charles Dickens, George Eliot, and Thomas Hardy--as narrators of this history, the long duration and diffuse effects of which required new literary forms to capture the lived experience of enclosure and its aftermath.

This study boldly reconceives the realist novel, not as an outdated artifact, but as witness to the material and environmental dispossession of enclosure--and bearer of utopian energies. These writers reinvented a commons committed to the collective nature of the social world. Illuminating the common at the heart of the novel--from common characters to commonplace events--Carolyn Lesjak reveals an experimental figuration of the lost commons, once a defining feature of the British landscape and political imaginary. In the face of privatization, climate change, new enclosures, and the other forms of slow violence unfolding globally today, this book looks back to a literature of historical trauma and locates within it a radical path forward.

Carolyn Lesjak is Associate Professor of English at Simon Fraser University. She is the author of Working Fictions: A Genealogy of the Victorian Novel (2006).