Hamilton and the Law: Reading Today's Most Contentious Legal Issues through the Hit Musical (Paperback) 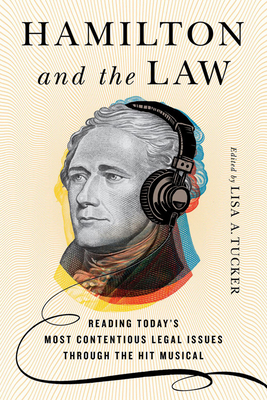 Since its Broadway debut, Hamilton: An American Musical has infused itself into the American experience: who shapes it, who owns it, who can rap it best. Lawyers and legal scholars, recognizing the way the musical speaks to some of our most complicated constitutional issues, have embraced Alexander Hamilton as the trendiest historical face in American civics. Hamilton and the Law offers a revealing look into the legal community's response to the musical, which continues to resonate in a country still deeply divided about the reach of the law.

A star-powered cast of legal minds--from two former U.S. solicitors general to leading commentators on culture and society--contribute brief and engaging magazine-style articles to this lively book. Intellectual property scholars share their thoughts on Hamilton's inventive use of other sources, while family law scholars explore domestic violence. Critical race experts consider how Hamilton furthers our understanding of law and race, while authorities on the Second Amendment discuss the language of the Constitution's most contested passage. Legal scholars moonlighting as musicians discuss how the musical lifts history and law out of dusty archives and onto the public stage. This collection of minds, inspired by the phenomenon of the musical and the Constitutional Convention of 1787, urges us to heed Lin-Manuel Miranda and the Founding Fathers and to create something new, daring, and different.

Lisa A. Tucker is Associate Professor of Law at the Thomas R. Kline School of Law at Drexel University and author of the novel Called On, as well as eleven books for children. She has been featured in numerous media outlets, including the Washington Post, the Chicago Tribune, People, Time, and NBC Nightly News.