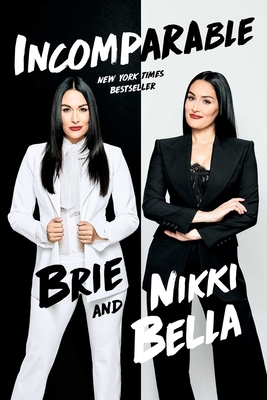 A raw, honest, and revealing co-memoir by Brie and Nikki Bella: twin sisters, WWE Hall of Fame inductees, and stars of the hit E! shows Total Bellas and Total Divas.

As twins, the Bellas have always competed. Legend has it that Nikki drop-kicked Brie in the womb so that she could make her grand entrance first. But the rest of the world often treated them as identical and even interchangeable, so they decided to do something about it.

After they made it into WWE, the Bellas accomplished so much together: bringing in young girls and women while building the Bella Army, helping the transition of female performers from Divas to Superstars, starring in Total Divas and Total Bellas, and founding companies like Birdiebee, Nicole + Brizee Beauty, and Bonita Bonita Wine.

Though their early journey began with loss, abuse, and plenty of rough times, these challenges “shined the diamond.” They resolved to be survivors and the heroes of their own stories, and to take control and responsibility for their lives. Eventually, they would come to show girls everywhere that they can do anything.

The Bellas may be identical twins—but as individuals, they have proven themselves Incomparable.

Brie Bella debuted on SmackDown in 2008, winning her first of many matches alongside her sister Nikki. A mother, reality star, entrepreneur, and WWE Hall of Famer, Brie makes up one half of the incomparable Bella Twins. She lives with her husband, WWE Superstar Daniel Bryan, and their daughter Birdie.

Nikki Bella made WWE history when she became the longest-reigning Divas Champion in 2015. A reality star, entrepreneur, and WWE Hall of Famer, Nikki makes up one half of the incomparable Bella Twins along with her sister Brie. She is engaged to fiancé Artem Chigvintsev.

“Brie and Nikki Bella are far from shy on Total Bellas, but there's much more to their lives than what viewers see on TV every week. The Bella Twins share their experiences with abuse, heartache, family strife, and sexual assault in their debut book Incomparable.” —E! Online “Books by Boss Ladies We Love” round-up

“The WWE stars turned successful moguls write candidly about their past to explain how they molded into the strong women they are today… Through their accounts, they are able to offer hope to readers that they can do anything by working hard, turning negatives into positives and being the heroes of their own stories.” —The Hollywood Reporter