Fight of the Century: Writers Reflect on 100 Years of Landmark ACLU Cases (Paperback) 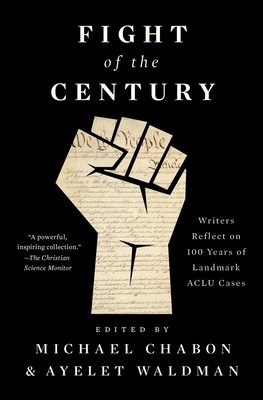 The American Civil Liberties Union partners with award-winning authors Michael Chabon and Ayelet Waldman in this “forceful, beautifully written” (Associated Press) collection that brings together many of our greatest living writers, each contributing an original piece inspired by a historic ACLU case.

On January 19, 1920, a small group of idealists and visionaries, including Helen Keller, Jane Addams, Roger Baldwin, and Crystal Eastman, founded the American Civil Liberties Union. A century after its creation, the ACLU remains the nation’s premier defender of the rights and freedoms guaranteed by the Constitution.

In collaboration with the ACLU, authors Michael Chabon and Ayelet Waldman have curated an anthology of essays “full of struggle, emotion, fear, resilience, hope, and triumph” (Los Angeles Review of Books) about landmark cases in the organization’s one-hundred-year history. Fight of the Century takes you inside the trials and the stories that have shaped modern life. Some of the most prominent cases that the ACLU has been involved in—Brown v. Board of Education, Roe v. Wade, Miranda v. Arizona—need little introduction. Others you may never even have heard of, yet their outcomes quietly defined the world we live in now. Familiar or little-known, each case springs to vivid life in the hands of the acclaimed writers who dive into the history, narrate their personal experiences, and debate the questions at the heart of each issue.

Hector Tobar introduces us to Ernesto Miranda, the felon whose wrongful conviction inspired the now-iconic Miranda rights—which the police would later read to the man suspected of killing him. Yaa Gyasi confronts the legacy of Brown v. Board of Education, in which the ACLU submitted a friend of- the-court brief questioning why a nation that has sent men to the moon still has public schools so unequal that they may as well be on different planets. True to the ACLU’s spirit of principled dissent, Scott Turow offers a blistering critique of the ACLU’s stance on campaign finance.

These powerful stories, along with essays from Neil Gaiman, Meg Wolitzer, Salman Rushdie, Ann Patchett, Viet Thanh Nguyen, Louise Erdrich, George Saunders, and many more, remind us that the issues the ACLU has engaged over the past one hundred years remain as vital as ever today, and that we can never take our liberties for granted.

Chabon and Waldman are donating their advance to the ACLU and the contributors are forgoing payment.

Michael Chabon is the bestselling and Pulitzer Prize–winning author of many books, including The Amazing Adventures of Kavalier & Clay, The Yiddish Policemen’s Union, Gentlemen of the Road, Telegraph Avenue, Moonglow, Pops, and the picture book The Astonishing Secret of Awesome Man. He is the editor, with Ayelet Waldman, of Kingdom of Olives and Ash: Writers Confront the Occupation and Fight of the Century.

Ayelet Waldman is the author of the memoir, A Really Good Day, as well as of novels including Love and Treasure, Red Hook Road, and Love and Other Impossible Pursuits. She is the editor of Inside This Place, Not of It: Narratives from Women's Prisons, and with Michael Chabon, of Kingdom of Olives and Ash: Writers Confront the Occupation and Fight of the Century.

Dave Eggers is the bestselling author of seven books, including A Hologram for the King, a finalist for the National Book Award; Zeitoun, winner of the American Book Award and Dayton Literary Peace Prize; and What Is the What, which was a finalist for the National Book Critics Circle Award and won France’s Prix Medici. That book, about Valentino Achak Deng, a survivor of the civil war in Sudan, gave birth to the Valentino Achak Deng Foundation, which operates a secondary school in South Sudan run by Mr. Deng. Eggers is the founder and editor of McSweeney’s, an independent publishing house based in San Francisco that produces a quarterly journal, a monthly magazine, The Believer:, a quarterly DVD of short films and documentaries, Wholphin; and an oral history series, Voice of Witness. In 2002, with Nínive Calegari he cofounded 826 Valencia, a nonprofit writing and tutoring center for youth in the Mission District of San Francisco. Local communities have since opened sister 826 centers in Chicago, Los Angeles, New York, Ann Arbor, Seattle, Boston, and Washington, D.C. Eggers is also the founder of ScholarMatch, a program that matches donors with students needing funds for college tuition. A native of Chicago, Eggers now lives in Northern California with his wife and two children.

Meg Wolitzer’s novels include The Female Persuasion; Sleepwalking; This Is Your Life; Surrender, Dorothy; and The Position. She lives in New York City.

Moriel Rothman-Zecher is an Israeli-American novelist and poet. He is a 2018 National Book Foundation “5 Under 35” honoree and received a 2017 MacDowell Colony Fellowship for Literature. His writing has been published in The New York Times, The Paris Review’s “The Daily,” Haaretz, and elsewhere. He lives in Yellow Springs, Ohio, with his wife, Kayla, and daughter, Nahar. Read more at TheLefternWall.com and follow him on Twitter @Moriel_RZ.

Jennifer Egan is the author of six previous books of fiction: Manhattan Beach, winner of the Andrew Carnegie Medal for Excellence in Fiction; A Visit from the Goon Squad, which won the Pulitzer Prize and the National Book Critics Circle Award; The Keep; the story collection Emerald City; Look at Me, a National Book Award Finalist; and The Invisible Circus. Her work has appeared in The New Yorker, Harper’s Magazine, Granta, McSweeney’s, and The New York Times Magazine. Her website is JenniferEgan.com.

Scott Turow is the bestselling author of numerous titles, including The Last Trial, Testimony, Identical, Innocent, Presumed Innocent, and The Burden of Proof. Several of his books have been adapted into movies and television projects. His writing has appeared in publications such as The New York Times, The Washington Post, Vanity Fair, The New Yorker, and The Atlantic.

Morgan Parker is a poet, essayist, and novelist and the author of the California Book Award–nominated young adult novel Who Put This Song On? and the poetry collections Other People’s Comfort Keeps Me Up at Night, There Are More Beautiful Things Than Beyoncé, and Magical Negro, which won the 2019 National Book Critics Circle Award and California Book Award. Parker’s work has appeared in such publications as The Paris Review, The New York Times, The New York Review of Books, Time, Best American Poetry, and Playbill. She is the recipient of a National Endowment for the Arts Literature Fellowship, winner of a Pushcart Prize, a Cave Canem graduate fellow, and cofounder the Other Black Girl Collective with Angel Nafis. Morgan lives in Los Angeles.

Neil Gaiman is an award-winning author of books, graphic novels, short stories, and films for all ages. His titles include Norse Mythology, The Graveyard Book, Coraline, The View from the Cheap Seats, The Ocean at the End of the Lane, Neverwhere, and the Sandman series of graphic novels, among other works. His fiction has received Newbery, Carnegie, Hugo, Nebula, World Fantasy, and Eisner awards. The film adaptation of his short story “How to Talk to Girls at Parties” and the second season of the critically acclaimed, Emmy-nominated television adaptation of his novel American Gods will be released in 2018. Born in the UK, he now lives in the United States.

Anthony Doerr is the author of the New York Times bestselling Cloud Cuckoo Land, which was a finalist for the National Book Award, and All the Light We Cannot See, winner of the Pulitzer Prize, the Carnegie Medal, the Alex Award, and a #1 New York Times bestseller. He is also the author of the story collections Memory Wall and The Shell Collector, the novel About Grace, and the memoir Four Seasons in Rome. He has won five O. Henry Prizes, the Rome Prize, the New York Public Library’s Young Lions Award, the National Magazine Award for fiction, a Guggenheim Fellowship, and the Story Prize. Born and raised in Cleveland, Ohio, Doerr lives in Boise, Idaho, with his wife and two sons.

Adrian Nicole LeBlanc's first book, Random Family, was a New York Times Bestseller, a finalist for the National Book Critics Circle Award, and the winner of The Anisfield-Wolf Book Award and the Ridenhour Book Prize. LeBlanc's work has been published in The New York Times Magazine, The New Yorker, Esquire, Elle, Spin, The Source, The Village Voice, and other magazines. LeBlanc lives in Manhattan.

“Moving . . . Entertaining . . . It’s enlightening to watch some of our most masterly literary portraitists restore the warts and wardrobes, the motivations and machinations to those whose stories have been stripped down to surnames or pseudonyms.”
—Monica Youn, New York Times Book Review

"A finely edited almanac of lively, contextually grounded stories that read like the greatest hits of freedom . . . Provides insights that are both riveting and refreshingly diverse."
—Kirkus Reviews