The Fellowship of the Beatific Vision (Veritas #22) (Paperback) 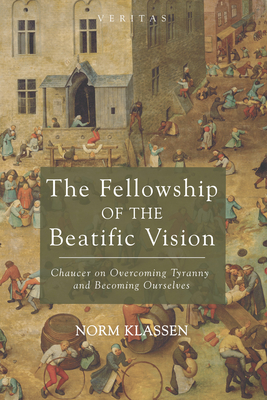 In The Canterbury Tales, Geoffrey Chaucer asks a basic human question: How do we overcome tyranny? His answer goes to the heart of a revolutionary way of thinking about the very end of human existence and the nature of created being. His answer, declared performatively over the course of a symbolic pilgrimage, urges the view that humanity has an intrinsic need of grace in order to be itself. In portraying this outlook, Chaucer contributes to what has been called the ""palaeo-Christian"" understanding of creaturely freedom. Paradoxically, genuine freedom grows out of the dependency of all things upon God. In imaginatively inhabiting this view of reality, Chaucer aligns himself with that other great poet-theologian of the Middle Ages, Dante. Both are true Christian humanists. They recognize in art a fragile opportunity: not to reduce reality to a set of dogmatic propositions but to participate in an ever-deepening mystery. Chaucer effectively calls all would-be members of the pilgrim fellowship that is the church to behave as artists, interpretively responding to God in the finitude of their existence together. ""The Canterbury Tales do much more than narrate disparate and conflicting stories of a traveling band of pilgrims. Norm Klassen opens up the premodern horizons of the tales by explaining that Chaucer's 'oblique apologetic' intends to draw us into the sacramental ontology that animates the narrative. Klassen's exposition opens our eyes to the myriad ways in which the beatific vision is adumbrated in the midst of clashing voices and this-worldly realities that we inhabit."" --Hans Boersma, J. I. Packer Professor of Theology, Regent College; author of Heavenly Participation: The Weaving of a Sacramental Tapestry (2011) ""Chaucerian Norm Klassen notes that 'Chaucer's poetry is nothing if not hopeful and that] he invites his audience and readers to share in the mirth of belief.' And this is also what Klassen does in this richly textured theological reading of the master pilgrim who leads us into strange lands, full of mystery, grace, and possibility. Theology and art conjoin in a luminous way through Klassen's imagination and the reader participates vicariously in a peregrination wondrous and surprising."" --Michael W. Higgins, biographer; Thomas Merton scholar; author of Jean Vanier: Logician of the Heart Norm Klassen is Associate Professor of English Literature at St Jerome's University in Waterloo, Canada. He is the author of Chaucer on Love, Knowledge, and Sight (1995) and coauthor of The Passionate Intellect: Incarnational Humanism and the Future of University Education (2006).