Something Inside So Strong: Life in Pursuit of Choice, Courage, and Change (Willie Morris Books in Memoir and Biography) (Hardcover) 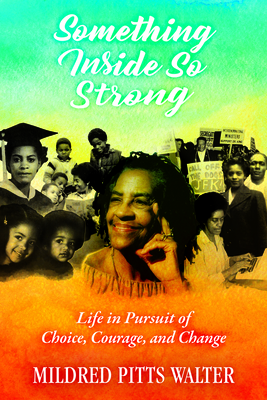 In 1922, Mildred Pitts Walter was born in DeRidder, Louisiana, to a log cutter and a midwife/beautician. She became the first member of her family to go to college, graduating in 1940. Walter moved to California, where she worked as an elementary school teacher. After being encouraged by a publisher to write books for and about African American children, Walter went on to become a pioneer of African American children's literature. Most notably, she wrote Justin and the Best Biscuits in the World, which bent preconceptions with tales of black cowboys and men doing "women's work." She was also a contributing book reviewer to the Los Angeles Times.

In Something Inside So Strong: Life in Pursuit of Choice, Courage, and Change, Walter recollects major touchstones in her life. The autobiography, divided into three parts, "Choice," "Courage," and "Change," covers Walter's life beginning with her childhood in the 1920s and moving to the present day.

In "Choice," Walter describes growing up in a deeply segregated Louisiana and includes memories of school, rural home life, World War II, and participating in neighborhood activities like hog killing and church revivals. "Courage" documents her adjustment to living away from family, her experiences teaching in Los Angeles, and her extensive work with her husband for the Los Angeles chapter of the Congress of Racial Equality. The final section, "Change," shows how Walter's writing and activism merged, detailing her work as an education consultant and as an advocate for nonviolent resistance to racism. It also reveals how her world travels expanded her personal inquiry into Christianity and African spirituality. Something Inside So Strong is one woman's journey to self-discovery.

Mildred Pitts Walter is an award-winning author of twenty-one books, including Justin and the Best Biscuits in the World and Mississippi Challenge. Born in Louisiana at the height of the Jim Crow era, she has been a lifetime activist in the civil rights and human rights movements, and she has served as a member of the Congress of Racial Equality and worked with the American Civil Liberties Union.