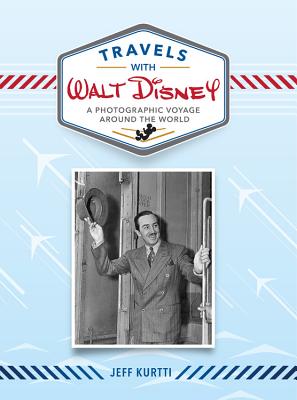 This elegantly compact, jacketed hardcover book celebrates Walt Disney’s worldwide experiences and influences. It’s perfect for any coffee table or library--and can still fit in as on-the-go reading!
From his earliest years, Walt Disney aimed to expand his boundaries: physical, creative, and intellectual. Throughout his life, Walt was a frequent and enthusiastic "tourist," visiting destinations around the United States of America and across the globe. Whether attending a premiere, supervising a film production, or simply vacationing with his family, the "All-American" Walt became a citizen of the world. From Denmark to Argentina, England to Greece, Austria, Chile, Canada, France . . . all of them welcomed Walt as an emissary of his good name, good works, and good reputation.
In Travels with Walt Disney: A Photographic Voyage Around the World, seldom-seen and never-before-published photographs are showcased along with eyewitness recollections and enlightening anecdotes, arranged into a one-of-a-kind "travel journal" as if Walt himself might have documented these exciting excursions in one special place to keep the memories alive and to share with readers.
Searching for that perfect gift for the #1 Disney fan in your life? Explore more behind-the-scenes stories from Disney Editions:

Jeff Kurtti is a leading authority on The Walt Disney Company, its founder, and its history. He is the author of more than twenty books, a writer-director of award-winning documentary content, and a respected public speaker. A Seattle, Washington native, Kurtti worked as a production coordinator on the 1984 Los Angeles Olympic Arts Festival, followed by two years as the assistant to the president of the California Institute of the Arts. For several years, he worked for Walt Disney Imagineering, the theme park design division of The Walt Disney Company, and then for the Corporate Special Projects department of Disney. Since 1995, Kurtti has enjoyed a career as an author, writer, and consultant in the motion picture, theatre, and theme park entertainment industries. He was creative director, content consultant, and media producer for The Walt Disney Family Museum in San Francisco and a producer of The Boys: The Sherman Brothers Story, a critically acclaimed documentary about the famed songwriters.

". . . a perfect gift for any Disney fan (even if it’s you, yourself)."—Leonard Maltin, film critic and historian

"This is a book I have wanted to own for about the last 20 years! . . . ready be picked and arranged on your Christmas mantelpiece!"—Brian Sibley, writer, broadcaster, and Disney scholar

PRAISE FOR PRACTICALLY POPPINS IN EVERY WAY

"Practically Poppins goes above and beyond the mandate of a movie tie-in to become a valuable book for any Mary Poppins fan."—Leonard Maltin, film critic and historian

PRAISE FOR PRACTICALLY POPPINS IN EVERY WAY

"This coffee table–worthy book by Jeff Kurtti is much more than a visually appealing celebration of the franchise."—Broadway Direct

PRAISE FOR THE ART OF DISNEY COSTUMING

"Explore the characters, stories, history, and currency of Disney in a whole new way. . . ."—Nerds and Beyond

PRAISE FOR THE ART OF DISNEY COSTUMING

PRAISE FOR THE ART OF MULAN

". . . chronicles the production team’s research trip to China and the creative development of the pic . . ."—Variety

PRAISE FOR TRAVELS WITH WALT DISNEY"As is his habit (can he help himself?), Jeff Kurtti has written another supremely researched and written book about the world of Walt Disney—except that this time, Walt’s world is exactly that. In exploring the heretofore under-researched subject of Walt and his extensive travels, Jeff relates the stories behind everything from gypsy jaunts to lengthy cruises, from exotic locales to Disneyland and beyond, with his usual elegant authority. Also included in this beautifully-designed volume are rare, lovingly curated photos and a generous sampling of Walt’s own words and writings on the subjects of travel and transportation. There are even some surprises along the way, such as pageants, parades and premieres. And since Jeff has long delved into the most hidden details of Disney history, there are little known nuggets of knowledge that will give even the most ardent Disney fan and Walt follower a most apt thrill of discovery. In reading the fascinating text and perusing the photos and other images, readers will find themselves in the company of two of the most intriguing travelers imaginable, Kurtti and Disney.”
—<strong>Jim Fanning</strong>, Disney author and historian<br>

PRAISE FOR TRAVELS WITH WALT DISNEY"It's no small feat to do what Jeff Kurtti has done in Travels with Walt Disney—he has assembled an absorbing scrapbook of rarely seen photos, unique artifacts, and revealing quotes that trace the many Disney journeys that would eventually become the Disney tales that shaped our imaginations. There's so much detail here that you'll begin to wonder if Walt ever stayed home. Thank goodness for us he didn't."
—<strong>Jason Cochran</strong>, Editor-in-Chief, <strong>Frommers.com</strong><br>

PRAISE FOR TRAVELS WITH WALT DISNEY"Jeff Kurtti traces Walt's excursions (to France during the last days of WWI) his travels by trains (of course!), boats and planes, his great adventure South of the Border, his visits to Europe which fired his imagination, inspired films and had an influence on Disneyland and other projects. The book also shows how Walt's ever-widening perspective on the world helped shape series such as the True Life Adventures and plans for creating better world communities. The book is literally stuffed with official and family photos charting the itineraries of a busy life and full career."
—<strong>Brian Sibley</strong>, writer, broadcaster, and Disney scholar

PRAISE FOR TRAVELS WITH WALT DISNEY"My job has me traveling a great deal. Once in Vienna with the late Roy E. Disney, we got into a bit of financial challenge when we discovered that there was a problem using credit cards in Austria, and that we needed a very large amount of cash to cover our expenses. Roy and I were a bit flummoxed, and I met with the elderly Manager of our hotel. She told me a glorious story of Walt staying in the very same hotel when he made his two beloved films set there, one about the Lipizzaner Stallions and one about the Vienna Boy Choir. She said Walt helped give Austria pride again after WWII, and that, of course, the hotel would front us any cash we needed. She 'knew' we were good for it. I’ve found that as a longtime Disney employee, everywhere I go people know of Walt Disney. His reputation and extraordinary achievements seem universal. What surprised me in Jeff Kurtti’s new book, Travels with Walt Disney, is that Walt himself was a world traveler, crossing the country and circling the globe for his myriad projects and vacations with his family. This 'photographic voyage' is a fascinating and entertaining view of Walt’s world.”
—<strong>Thomas Schumacher</strong>, president and producer, Disney Theatrical Productions<br>

PRAISE FOR TRAVELS WITH WALT DISNEY"This is an untold story of a man you thought you knew pretty much everything about. A really great look at the public, the professional, and the private Walt."
—<strong>Gary Trousdale</strong>, co-director, Beauty and the Beast, The Hunchback of Notre Dame<br>

PRAISE FOR TRAVELS WITH WALT DISNEY"Walt Disney was always an adventurer at heart. . . . Disney didn’t record all his adventures in one place, but a new book does just that. . . . There are pictures of the young Walt sketching cartoons in his Red Cross barracks, sweet family photos of the Disney family on vacation, and candid, behind-the-scenes shots of the animator having fun on set."
—<strong>Parade</strong><br>

PRAISE FOR TRAVELS WITH WALT DISNEY"What would it be like to travel the world with Walt Disney, to sit at a cafe, hear his stories, and to see the world through the eyes of one of the greatest storytellers of the twentieth century? Now, in the pages and pictures of this incredible travelogue, Jeff Kurtti takes us on that magical trip in a one-of-a-kind way.”
—<strong>Don Hahn</strong>, producer, <em>The Lion King and Beauty and the Beast<br></em>