Expecting Better: Why the Conventional Pregnancy Wisdom Is Wrong - And What You Really Need to Know [With CDROM] (Compact Disc) 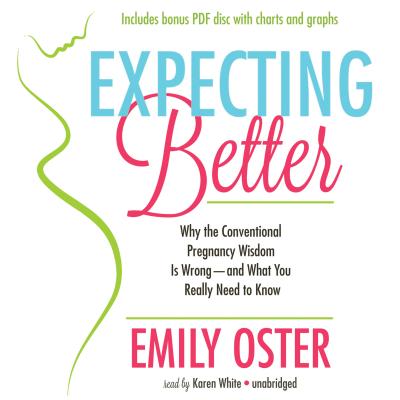 An award-winning social scientist uses the tools of economics to debunk myths about pregnancy and to empower women to make better decisions while they're expecting.

Pregnancy is full of rules. Pregnant women are often treated as if they were children, given long lists of items to avoid-alcohol, caffeine, sushi-without any real explanation from their doctors about why. They hear frightening and contradictory myths from friends and pregnancy books about everything from weight gain to sleeping on your back to bed rest. Economist Emily Oster believes there is a better way. In Expecting Better, she shows that the information given to pregnant women is sometimes wrong and almost always oversimplified, and she debunks a host of standard recommendations on everything from drinking to fetal testing.

When Oster was expecting her first child, she felt powerless to make the right decisions. How doctors think and what patients need are two very different things. So Oster drew on her own experience and went in search of the real facts about pregnancy using an economist's tools. Economics is not just a study of finance. It's the science of determining value and making informed decisions. To make a good decision, you need to understand the information available to you and to know what it means to you as an individual.

Take alcohol. We all know that Americans are cautious about drinking during pregnancy. Official recommendations call for abstinence. But Oster argues that the medical research doesn't support this; the vast majority of studies show no impact from an occasional drink. The few studies that do condemn light drinking are deeply flawed, including one in which the light drinkers were also heavy cocaine users.

Expecting Better overturns standard recommendations for alcohol, caffeine, sushi, bed rest, and induction while putting in context the blanket guidelines for fetal testing, weight gain, risks of pregnancy over the age of thirty-five, nausea, and more. Oster offers the real-world advice one would never get at the doctor's office. The health of your baby is paramount, and with this practical guide readers can know more and worry less. Having the numbers is a tremendous relief-and so is the occasional glass of wine.