The Discourses: Reflections on History, Sufism, Theology, and Literature--Volume One (Library of Arabic Literature #77) (Paperback) 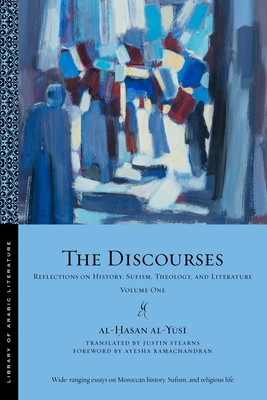 This is book number 77 in the Library of Arabic Literature series.

Al-Ḥasan al-Yūsī was arguably the most influential and well-known Moroccan intellectual figure of his generation. In 1084/1685, at the age of roughly fifty-four, and after a long and distinguished career, this Amazigh scholar from the Middle Atlas began writing a collection of short essays on a wide variety of subjects. Completed three years later and gathered together under the title Discourses on Language and Literature (al-Muhadarat fi l-adab wa-l-lughah), they offer rich insight into the varied intellectual interests of an ambitious and gifted Moroccan scholar, covering subjects as diverse as genealogy, theology, Sufism, history, and social mores. In addition to representing the author's intellectual interests, The Discourses also includes numerous autobiographical anecdotes, which offer valuable insight into the history of Morocco, including the transition from the Saadian to the Alaouite dynasty, which occurred during al-Yūsī's lifetime. Translated into English for the first time, The Discourses offers readers access to the intellectual landscape of the early modern Muslim world through an author who speaks openly and frankly about his personal life and his relationships with his country's rulers, scholars, and commoners. An English-only edition.

al-Ḥasan al-Yūsī (Author) Al-Ḥasan al-Yūsī (d. 1102/1691) was a major eleventh/seventeenth-century Moroccan scholar and a prolific author of books on a wide variety of subjects, including Flowers from the Greatest Proverbs and Sayings. Ayesha Ramachandran (Foreword by) Ayesha Ramachandran is Associate Professor of Comparative Literature at Yale University. She is the author of The Worldmakers: Global Imagining in Early Modern Europe. Justin Stearns (Translator) Justin Stearns is Associate Professor in Arab Crossroads Studies at NYU Abu Dhabi. He is the author of Infectious Ideas: Contagion in Pre-Modern Islamic and Christian Thought in the Western Mediterranean and Revealed Sciences: The Natural Sciences in Islam in Seventeenth-Century Morocco.