The Last Civilized Place: Sijilmasa and Its Saharan Destiny (Paperback) 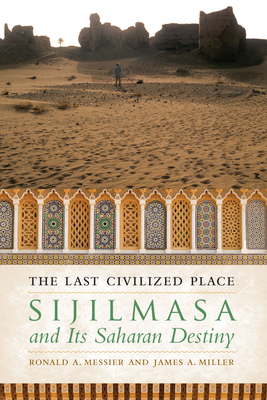 By Ronald A. Messier, James A. Miller
$32.95
Sorry, Currently unavailable or backordered

Set along the Sahara’s edge, Sijilmasa was an African El Dorado, a legendary city of gold. But unlike El Dorado, Sijilmasa was a real city, the pivot in the gold trade between ancient Ghana and the Mediterranean world. Following its emergence as an independent city-state controlling a monopoly on gold during its first 250 years, Sijilmasa was incorporated into empire—Almoravid, Almohad, and onward—leading to the “last civilized place” becoming the cradle of today’s Moroccan dynasty, the Alaouites. Sijilmasa’s millennium of greatness ebbed with periods of war, renewal, and abandonment. Today, its ruins lie adjacent to and under the modern town of Rissani, bypassed by time.

The Moroccan-American Project at Sijilmasa draws on archaeology, historical texts, field reconnaissance, oral tradition, and legend to weave the story of how this fabled city mastered its fate. The authors’ deep local knowledge and interpretation of the written and ecological record allow them to describe how people and place molded four distinct periods in the city’s history. Messier and Miller compare models of Islamic cities to what they found on the ground to understand how Sijilmasa functioned as a city. Continuities and discontinuities between Sijilmasa and the contemporary landscape sharpen questions regarding the nature of human life on the rim of the desert. What, they ask, allows places like Sijilmasa to rise to greatness? What causes them to fall away and disappear into the desert sands?

Ronald A. Messier is Professor Emeritus of History at Middle Tennessee State University. From 1987 to 1998, he directed the excavation of Sijilmasa. He is the author of The Almoravids and the Meanings of Jihad and coeditor of The Jihad and Its Times.James A. Miller is the Director of the Moroccan-American Commission for Educational and Cultural Exchange (MACECE), the Fulbright Commission in Morocco. He is Associate Professor Emeritus of Geography at Clemson University and the author of Imlil: A Modern Moroccan Geography.